‘A gorgeous specimen of oligarchical luxury’

Frederic Leighton was born in 1830 in Scar­bor­ough, in the North Riding of Yorkshire, but spent much of his childhood in conti­nental Europe, where he learnt several languages and went to school in Florence and Frankfurt. Leighton had many talents, of which painting proved the most prof­itable. He was tech­ni­cally capable, versatile (though primarily neoclas­sical) and hard working, though not an excep­tional innovator. Like many other successful artists, his greatest asset was what might now be called his marketing nous, and his home in Holland Park is the prime example of this talent.

Built in 1864–6, when Leighton was still in his mid-30s, the house was designed by the architect George Aitchison, working under the artist’s close direction. With his paintings commanding four-figure sums from aspiring patrons of the arts – espe­cially newly wealthy indus­tri­al­ists – and with family money behind him too, Leighton was able to expand and embellish this ‘private palace of art’ over the following three decades, creating a magnif­i­cent showcase for his work.

The multi­fac­eted exterior, with its red Suffolk brick and Caen stone dressings, is impres­sive but hardly awe-inspiring. Inside, however, his visitors’ senses were over­whelmed by deco­ra­tive riches. These reached their zenith in the golden dome, indoor fountain and medieval Turkish and Syrian ceramics of the Arab Hall, which was built in 1877. A year later Leighton was knighted and made president of the Royal Academy.

The interior may have been to his own distinc­tive taste but its opulence was also a brilliant public relations exercise. He presided over regular Sunday recep­tions and musical soirées here, which were attended by everyone who was anyone in the world of the arts. Leighton, his home and his parties became the talk of London society and were lavishly featured in all the fash­ion­able peri­od­i­cals. Envious friends and rival artists were prompted to set up home close by, and some attempted their own exercises in osten­ta­tious interior design, though none matched Leighton’s excesses.

A lifelong bachelor, Leighton seems to have had no private life at all and to have spent all his waking hours either working or enter­taining. Unlike the house’s fabulous public areas, his bedroom (shown in the photo­graph below) was posi­tively austere, with a solitary electric lamp and a bed that was scarcely more luxurious than his butler’s in the basement. There was no guest room because none of his innu­mer­able guests was ever invited to stay overnight.

On his death in 1896, imme­di­ately after he had been raised to the peerage, Leighton’s home passed to his twin sisters, who imme­di­ately set about auctioning every item that wasn’t bolted down, and several that were, largely because the artist had made numerous generous bequests in his will that couldn’t otherwise have been funded. The house itself, with its sole upstairs bedroom, proved much harder to sell than its trappings and ended up in the posses­sion of the Royal Borough of Kensington.

To compound the loss of its contents, a series of well-meaning but ill-consid­ered repairs over the course of the 20th century (including those neces­si­tated by Second World War bomb damage) conspired to further discon­nect the house from its original appear­ance. Almost all these wrongs were put right during a 17-month, £1.6 million refur­bish­ment programme that was completed in 2010. A team of researchers and crafts­people created facsim­iles of the original fabrics, wall­pa­pers and furniture. Even the electric lighting levels and colour temper­a­tures of 1896 have been repli­cated, though the bright­ness can be turned up when necessary. Some original paintings by Leighton and his Holland Park circle of friends have been repur­chased or loaned for display here. His lordship would be delighted if he could see the old place now. 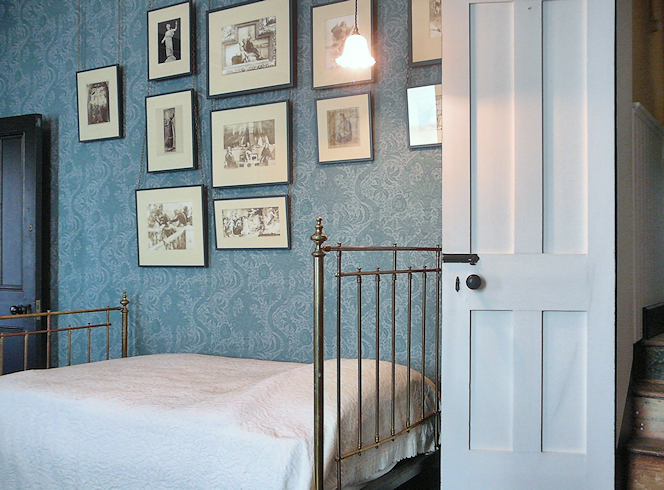 The quotation at the top of this article is taken from a letter written by William Michael Rossetti to his wife Lucy in 1882.