If you’re hunting the big beasts of Egyptian archae­ology, the British Museum is the place to go. But for a more intimate encounter with relics of the realm of the pharaohs, seek out Univer­sity College London’s Petrie Museum.

The museum was estab­lished as a teaching resource by Sir William Matthew Flinders Petrie – who was Willie to his parents and Flinders (his mother’s maiden name) to his friends and colleagues. Brought up in an austere Christian household in Charlton, south-east London, where he was home schooled, Petrie never went to univer­sity except for a part-time course in algebra and trigonom­etry when he was 24. His life’s passion is revealed in the title of one of his books: Ten Years’ Digging in Egypt, 1881–1891. That decade’s work excluded Sundays because he never travelled, surveyed or dug on the Sabbath.

Flinders Petrie excavated dozens of major sites in the course of his career, and the locals he hired as labourers nicknamed him ‘the father of pots’. But his interests extended far beyond ceramics. The museum’s collec­tion encom­passes ancient Egyptian footwear and clothing – including a dress from 5000 BC – mummies and coffin cases, jewellery, the earliest example of metal from Egypt and the oldest will written on papyrus.

Though Petrie amassed the requisite material, the museum would never have come into existence without the generosity of the successful writer and keen Egyp­tol­o­gist Amelia Edwards. On her death in 1892 she bequeathed her own collec­tion of several hundred antiq­ui­ties, together with money to fund the first chair in Britain for Egyptian Archae­ology and Philology, with Petrie as the inaugural occupant of that chair. Edwards left her money to UCL as it was the only English univer­sity at the time to award degrees to women, and she named Petrie for the profes­sor­ship because the pair had formed a respectful friend­ship when the snooty experts at the British Museum wanted nothing to do with her.

After Petrie retired from UCL in 1933 his succes­sors continued to expand the museum’s collec­tion and began to properly register every item – a task Petrie himself had never even attempted. It took 70 years to complete the catalogue, which is now available to search online. During the Second World War the exhibits were packed away for safe­keeping and in the early 1950s they were put back on display in a former stable building – where they remain today, though the arrange­ment was at first intended to be only temporary.

The museum possesses about 80,600 objects (of which more than three-quarters were acquired by Petrie himself) illus­trating life in the Nile valley from prehis­tory through the time of the pharaohs, the Ptolemaic, Roman and Coptic periods to the Islamic period. One tenth of the collec­tion is on regular display, with cases of exhibits over­flowing all the way down the back stairs to the fire exit. Any item not on display can be viewed by arrange­ment – and you don’t have to be an accred­ited academic to do so.

Artefacts like those in the Petrie Museum can no longer be acquired legally, so the collec­tion has ceased to grow. However, the curators are still making enhance­ments, most recently with the creation of a multi-purpose space that hosts the museum’s programme of lectures, object-handling sessions, temporary exhi­bi­tions and music and film events. The new space also contains ‘augmented reality’ kiosks, in which visitors can ‘virtually’ take artefacts out of their display cases to inspect them up-close in 3D. 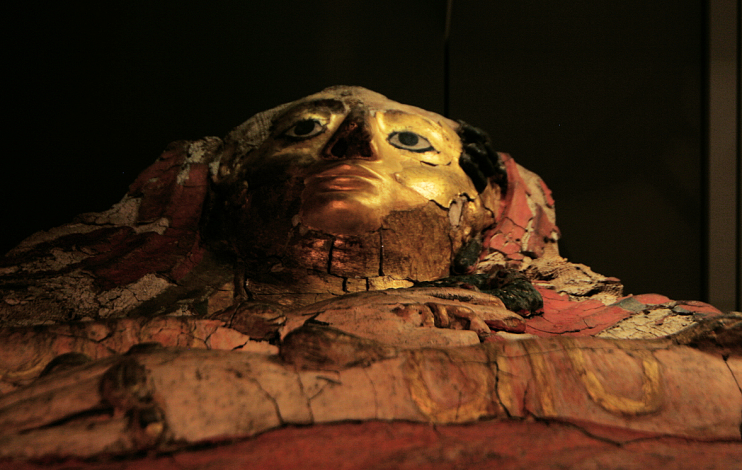 The title of this article is taken from a remark made by Professor Stephen Quirke, curator of the Petrie Museum: “The Petrie takes on one of the most important tasks for museums and univer­si­ties today – rehu­man­ising the past.”