From brewery mascot to king of the bridge

After the Lambeth marshes were drained at the beginning of the 18th century, this stretch of the South Bank became home to a pleasure garden and then to Lambeth water­works. At nearby King’s Arm Stairs, in 1769, arti­fi­cial stone specialist Daniel Pincot joined forces with the expe­ri­enced entre­pre­neur Eleanor Coade (whose back­ground was in linen and drapery) to establish a ceramics factory making deco­ra­tive mouldings. After two years the partners fell out and Mrs Coade there­after ran the company single-handedly under her own surname.

Her factory specialised in statues, busts and orna­men­ta­tions for buildings, such as keystone masks, friezes and vases, all made from a material that the propri­etress branded Lythodipyra – from the Greek for ‘twice-fired stone’. Most people simply called it Coade stone.

Much admired for its firmness of outline, creamy-white colour and dura­bility, espe­cially its resis­tance to frost, Coade stone was made from a finely ground mixture of fired clay, flint, sand and glass, baked at a very high temper­a­ture for several days.

The business prospered and in 1799 Mrs Coade opened a showroom near West­min­ster Bridge. She took on a series of business partners, most produc­tively her cousin John Sealy and later a more distant relative, William Croggon, who assumed sole ownership following Mrs Coade’s death in 1821 at her home in Camber­well. She was buried in the Dissenters’ graveyard in Bunhill Fields.

On his own death in 1835, William Croggon was succeeded by his son Thomas John, who kept the company going for a short while before selling out in the face of growing compe­ti­tion from Portland cement. During Thomas John’s period in charge James Goding estab­lished the Lion Brewery on a neigh­bouring plot of land leased from the Arch­bishop of Canter­bury, whose London residence is Lambeth Palace.

Goding commis­sioned the painter and sculptor William Frederick Wood­ington to create an emblem­atic pair of lions for the brewery in 1837. Each was cast in several parts at the Croggon works and then cramped together on an iron frame. They were among the last few items to be made in Coade stone. The beast now known as the South Bank Lion was mounted on a substan­tial base incised with the single word ‘BREWERY’ and installed on the parapet of the build­ing’s Thames frontage.

The Lion Brewery operated until 1924, when the business was absorbed by Hoare and Company of East Smith­field. The main Lambeth building was seriously damaged by fire in 1931, served as a store­house for waste paper for a few years and then stood derelict until its demo­li­tion in 1949 to make way for the construc­tion of the Royal Festival Hall.

The South Bank Lion was saved – report­edly at the request of George VI – repaired, painted gloss red and mounted on a plinth outside the Waterloo Station gate to the Festival of Britain site. When the station was enlarged in 1966 the lion was relocated to its present prominent position near the Lambeth end of West­min­ster Bridge, and stripped to the bare stone.

And what of the South Bank Lion’s twin? It too was rescued and now stands atop the central pillar of the west gate at Twick­enham Stadium, painted gold. 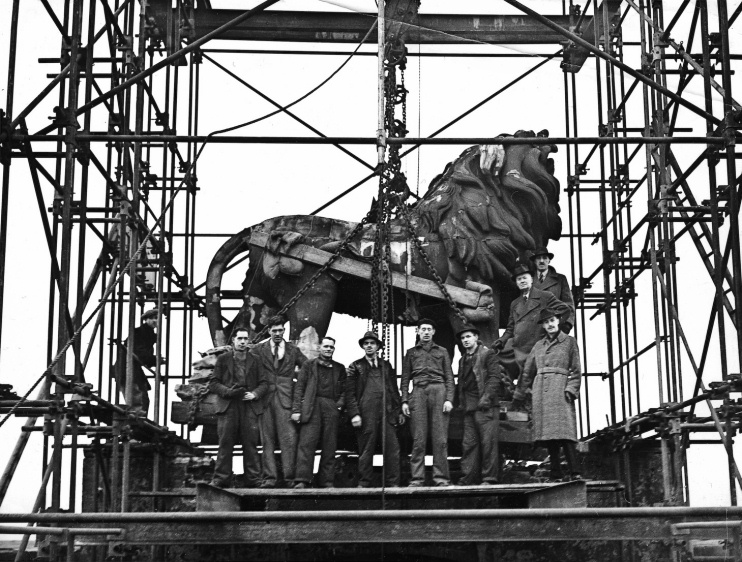 The photo­graph above was kindly shared by Nick Redman of London Photos, whose grand­fa­ther (second on the left) was one of the scaf­folders who helped move the lion from the soon-to-be-demol­ished brewery.