An industrial and working-class residential outpost of Crayford, located to the north-west of Dartford, Kent 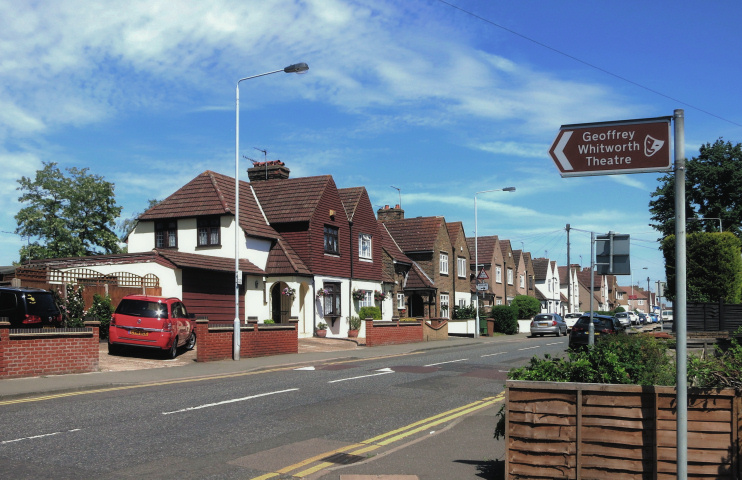 This was said to have been the site of Ellam, a medieval manor house. Like nearby Barne­hurst, it takes its present name from the Barne family, who owned land on the edge of the Crayford Marshes from the mid-18th century.

Maiden Lane has farm buildings and cottages that may be over 300 years old. Iron Mill Lane is named after a mill that made plate for armour. In a ‘swords to ploughshares’ conver­sion, the mill later switched to grinding Vitbe flour.

Barnes Cray and the neigh­bouring hamlet of Perry Street became increas­ingly indus­tri­alised in the latter part of the 19th century, with brick­works inland, mills and wharves by the river and factories alongside the railway line.

After the outbreak of the First World War, Vickers laid out a garden village here for employees at its Crayford munitions works, following a precedent the company had set at Vick­er­stown in Cumbria. Six hundred cottages were built in a variety of styles with the aid of a grant from the War Office. Each of the homes here had at least three bedrooms and more than half were constructed using roughcast concrete blocks.

The iron church of All Saints was erected in 1917. After the war Crayford council built more housing to the north and Kent county council provided Iron Mill Lane county primary school in 1939. The iron church was never upgraded and when it closed in 1960 it was not replaced.

Barnes Cray primary school, as it was latterly called, closed in 2009 and has been replaced by Haber­dashers’ Aske’s Crayford Academy, an ‘all through’ 3–18 academy special­ising in tech­nology. The majority of the academy’s students are white British and over one third are eligible for free school meals – more than double the national proportion.

Geoffrey Whitworth was a leading campaigner for the popu­lar­i­sa­tion of theatre and in 1918 he attended a play-reading by Vickers workers that inspired him to form the British Drama League. The drab but cultur­ally vital building that bears his name was opened in 1959 by Dame Sybil Thorndyke as the home of the British Theatre Group, located on Beech Walk. The theatre has partic­i­pated in the Royal Shake­speare Company’s Open Stages project, which has resulted in produc­tions such as The Tempest in 2012.

* The picture of Crayford Way (at the junction with Barnes Cray Road) on this page is adapted from an original photograph, copyright Des Blenkinsopp, at Geograph Britain and Ireland, made available under the Attribution-ShareAlike 2.0 Generic Licence. Any subsequent reuse is hereby freely permitted under the terms of that licence.