The former home of the world’s biggest gasworks and subsequently a docklands development area, situated west of Barking Creek and north of the Royal Albert Dock 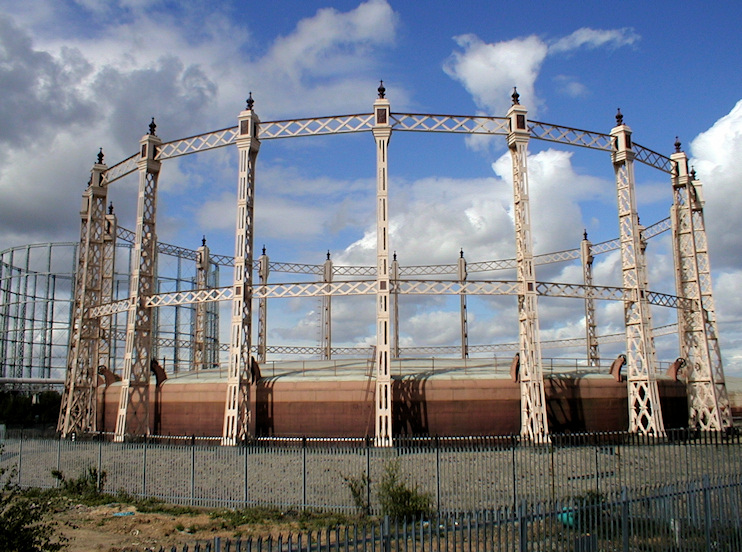 The first intrusion into the hitherto empty East Ham Levels was the construc­tion of the Northern Outfall Sewer in 1864, pouring raw waste into the Thames until the building of a treatment works 25 years later. The sewage works subse­quently became the largest in the country and today serve a popu­la­tion of three million, treating over 200 million gallons a day. In 1870 the Gas, Light and Coke Company estab­lished its London base here. Housing was built for the workers and the whole 400-acre site was named Beckton after the governor of the company, Simon Adams Beck.

At its peak, Beckton supplied gas to over four million Londoners, as well as manu­fac­turing by-products such as creosote, fertilisers, inks and dyes. It was not until the switch to natural gas in the 1960s that the works were scaled down. The neigh­bouring marshland was formerly occupied by hundreds of garden allot­ments and was also the site of a prisoner of war camp during the Second World War.

From 1981, docklands regen­er­a­tion in Beckton created a cluster of indus­trial and commer­cial ‘parks’ and thousands of new homes.

Beckton absorbed the local­i­ties of Cyprus (which has its own page on Hidden London) and Winsor Park, which was built in the 1870s to house gasworks employees. Frederic Winsor was the angli­cised name of Friedrich Albrecht Winzler, the Bavarian founder of the Gas, Light and Coke Company. Several original prop­er­ties survive on Winsor Terrace, with two-up-two-downs for the workers and gener­ously propor­tioned end-of-terrace houses for foremen.

A former indus­trial waste tip was land­scaped as ‘the Beckton Alps’ when the new town was built. Most of the waste was slag from Beckton gasworks but it also included debris from the basement of the new British Library, while a railway loco­mo­tive is said to be buried at the base. A dry ski slope was constructed on the hillside but this closed in 2001 and the site has since evolved into a nature reserve.

North Beckton, bordering the northern end of Woolwich Manor Way, was mostly built up in the late 1980s with a network of short streets, even shorter cul-de-sacs and dinky homes, many built as part of social housing schemes. A handful of more imag­i­na­tively designed prop­er­ties reveal that this was one of the later stages of Beckton’s rede­vel­op­ment, when the earlier insis­tence on unifor­mity was relaxed.

Commer­cial enter­prises like retail parks and leisure venues pressed eastwards across the former gasworks site from the 1990s onwards, into the territory known as Gallions Reach.