A Docklands Light Railway station named after the church of St Mary and Holy Trinity, which stands at the eastern end of Bow Road 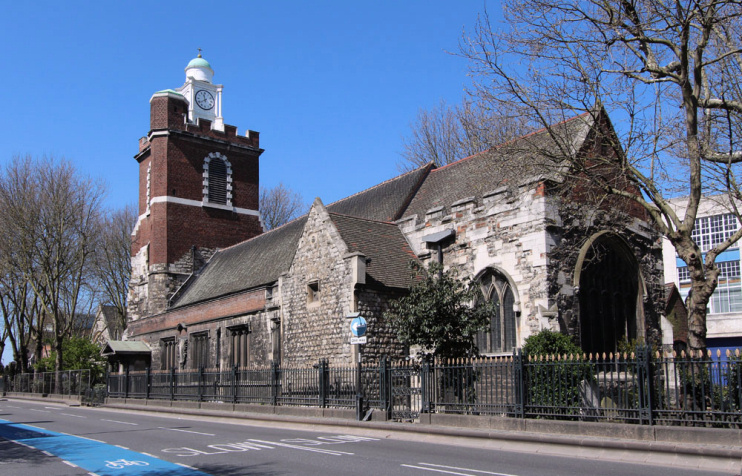 St Mary’s is one of only two medieval churches in the borough and was estab­lished in 1311 as a chapel of ease to Stepney. Parts of the present building date from its founding and from the late 15th century. St Mary’s became a parish church in 1719, when rebuilding was proposed. However, lack of funds prevented this, and subse­quent 19th-century proposals, from being imple­mented. Despite the nearby presence of a mid-19th-century pub called the Bow Bells, this St Mary’s should not be confused with the Church of St Mary-le-Bow, which is located in Cheapside and possesses the true Bow bells.

Bow station opened in 1850 on the North London Railway, with services to Poplar. The Great Eastern Railway later added through services to Fenchurch Street and Southend in Essex. The station stood on the north side of the road and was rebuilt in much-enlarged form in 1870.

The new station had a concert hall above the booking office, which was used for cultural and educa­tional purposes and later became the Bow Palais. Passenger services ceased in 1944, although the line continued to carry freight until its closure in 1981, after which the station buildings were demol­ished. The site is now occupied by a car hire firm. A new station called Bow Church opened on the opposite side of the road in 1987 as one of the original stops on the DLR network. The station is situated midway between the church and Bow Road tube station.

In 1882 Theodore Bryant of the Bow match-making company Bryant and May paid for a statue of prime minister William Gladstone to be erected in St Mary’s church­yard. According to the early feminist and workers’ rights activist Annie Besant, some of the ‘match girls’ who worked for Bryant and May ‘cut their arms and let their blood trickle on the marble paid for, in very truth, by their blood’. Even in recent years the statue has been peri­od­i­cally splashed with red paint in recol­lec­tion of this story.

* The photo of St Mary & Holy Trinity, Bow Church, at the top of this page is adapted from an original photograph, copyright John Salmon, at Geograph Britain and Ireland, made available under the Attribution-ShareAlike 2.0 Generic Licence. Any subsequent reuse is hereby freely permitted under the terms of that licence.
In the satellite map above, St Mary’s church is located in the traffic island formed by the two carriageways of Bow Road.