An amalgam of Victorian terraces and 20th-century council flats, located on the eastern side of Lower Clapton and separated from Hackney Marsh by the River Lee Navigation 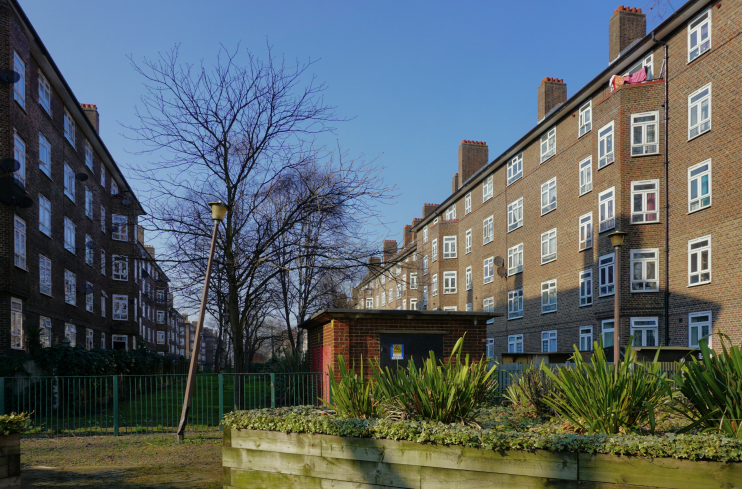 The Lee Navi­ga­tion’s Hackney Cut was made in 1769, leaving a marshy wilder­ness to its east and an almost equally empty area to its west as far as Newcome’s school, which later became the site of the London orphan asylum and is now the location of Clapton Girls’ Academy.

Much of the land here formed part of the estate of Hackney House, which had been built in 1728–32 for Stamp Brooks­bank, who was later to become governor of the Bank of England. The grandest residence of its kind in the area, Hackney House stood roughly where the north-west corner of Homerton Univer­sity Hospital is now.

The London & Suburban Land & Building Company invented the Clapton Park name for an estate that it laid out in two phases from the late 1860s onwards, mostly on land that had been part of the Hackney House estate, hitherto occupied by market gardens and water­cress beds.

London & Suburban began by laying out Chatsworth Road along a field path from Brooks­by’s Walk to Pond Lane (now Mill­fields Road) and then filled the space between that and Lower Clapton Road with the western ends of Clifden, Glenarm, and neigh­bouring roads. From the outset Chatsworth Road provided the main shopping facil­i­ties. Other amenities and busi­nesses followed, including the short-lived Clapton Park Theatre, which opened on Glenarm Road in 1875, and the Tower brewery on Ashenden Road, which later became a sack factory.

By the late 1880s Clapton Park’s dense network of terraced streets stretched all the way across to the Hackney Cut. South-east of Blinco Road (now the northern part of Daubeney Road) a remnant of Hackney Marsh was preserved as a recre­ation ground, which has since been reduced to an eleven-acre park called Daubeney Fields (or Green).

The area south of Redwald Road was the last to be developed, around the turn of the century, when Meeson Street was named.

Several places of worship were built too, including the Anglican churches of All Saints on Blurton Road and All Souls on Pedro Street, neither of which has survived. The latter was succeeded by All Souls (now the Church of the Risen Christ) on Overbury Street.

Shown in the photo­graph at the top of this article,* the low-rise Kingsmead estate was built by the London County Council in 1936–8 on 20 acres of Hackney Marsh, much of which had previ­ously been occupied by the National Projec­tile Factory. A prime objective of the scheme was to provide new homes for people displaced by a slum clearance programme in Bethnal Green. Kingsmead infants’ school (now Kingsmead primary) opened in 1953.

Clapton Park Methodist church opened on Chatsworth Road in 1958, replacing the Methodist chapel on Blurton Road, which became the Roman Catholic church of St Jude in 1965.

In the 1950s and 60s row after row of Victorian houses in the eastern half of Clapton Park were pulled down and replaced by ever larger estates of council flats, beginning with the modest Chatsworth estate, moving up a gear at the LCC’s Nye Bevan estate south of Mill­fields Road, which included a 12-storey tower, and culmi­nating in Hackney council’s system-built, high-rise Clapton Park estate. Clapton Park school (as it was then called) and the Glyn Arms were the only Victorian struc­tures in the Mandev­ille Street area to escape the municipal wrecking ball.

Three decades after they had been built, all but one of the Clapton Park estate’s towers were demol­ished and replaced by less mono­lithic blocks and more tradi­tional street patterns. The remaining tower, Sudbury Court, was sold to a private developer, renamed Landmark Heights and given a (somewhat super­fi­cial) makeover.

Condi­tions dete­ri­o­rated on the Kingsmead estate and in 1994 the Guardian chill­ingly described it as “a blighted labyrinth of five-storey concrete blocks that hits the headlines with depressing regu­larity. Remember the paedophile ring that led to the abuse and murder of teenage runaway, Jason Swift? The council gardener who held satanic masses and murdered his girlfriend’s five-year-old son? The desperate legal measures adopted by the council in the face of a crime wave police seemed unable or unwilling to curb? That was Kingsmead.”

Much has been done since then to improve living condi­tions and life chances at Kingsmead, which is now managed by Sanctuary Housing, with community support provided by Hackney Marsh Part­ner­ship.

In the early years of the 21st century the terraced streets of the original Clapton Park estate began to undergo gentri­fi­ca­tion and some upscale shops and cafés opened on Chatsworth Road (though not as many as a 2012 Observer article implies).

However, for the most part, Clapton Park remains a disad­van­taged locality. Residents of the King’s Park ward, which covers the majority of the area east of Chatsworth Road, tend to have fewer educa­tional qual­i­fi­ca­tions, be less likely to have a job and more likely to suffer long-term health problems than residents of other parts of Hackney, which as a whole is more deprived than most London boroughs. Sixteen per cent of homes in the ward are lone-parent house­holds – twice the national average.

At the 2011 census, 23 per cent of King’s Park’s residents were white British, 20 per cent were of black African origin or descent, 13 per cent Caribbean, 12 per cent ‘other white’ (half of whom are of Turkish heritage) and 10 per cent Asian.

Julian Perry’s painting The Enchanted Castle (1991), in the Museum of London, depicts one of the Clapton Park towers surrounded by unfeasibly tall trees. In 1996 Rachel Whiteread created duotone screenprints of photographs “capturing the moment the tower blocks cease to be habitable”, as part of a portfolio entitled Demolished.