A Heathrow satellite community lying between Hounslow and Hayes 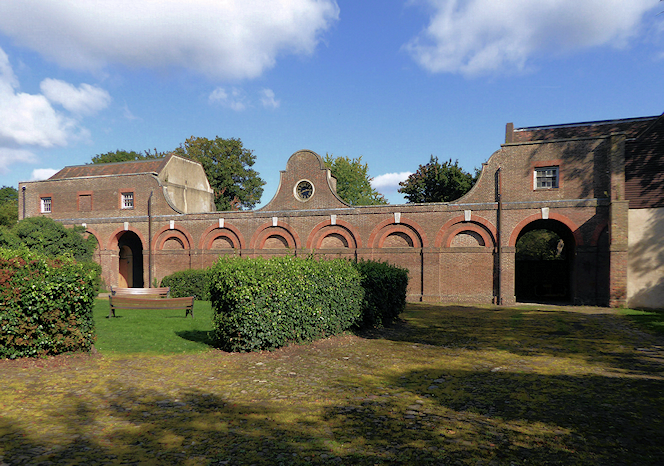 An early Saxon settle­ment on what became known as Hounslow Heath, the manor of Cranforde is mentioned in Domesday Book and was later described as the prettiest village in Middlesex. By 1274 there was a bridge carrying the Bath Road over the River Crane, but the village remained a quiet backwater until the early 20th century – even showing a slight decline in the late 19th century as the railway took away coaching traffic.

Cranford Park, once the grounds of Cranford House, lies beside the River Crane, imme­di­ately south of the M4. Cranford House was the seat of the Countess Berkeley, who so feared accu­sa­tions of perjury regarding the claimed date of her marriage that she had an escape tunnel constructed, which still runs under the park. Shown in the photo­graph above,* the stable block is the most complete part of the remaining buildings of the house.

Also in the park, St Dunstan’s church has a 15th-century tower and 18th-century nave. A memorial stone in the church­yard is dedicated to the comedian Tony Hancock and his mother.

Across the motorway, in a small extension of the park, are the remains of a moat marking the site of the manor house of Cranford-le-Mote, which was demol­ished in 1780.

The High Street still has some 17th- and 18th-century buildings – and the Round House (c.1838, shown in the photo on the right), in which petty criminals used to be impris­oned overnight. Such struc­tures used to be common­place but this is the only one of its kind left in London and it was grade II listed in 1973. In Liverpool, the grandly named Prince Rupert’s Tower – a similarly circular lock-up that’s not much larger than Cran­ford’s, though it has a steeper roof – features as the centre­piece on the crest of Everton football club.

Heathrow Airport has brought signif­i­cant commer­cial devel­op­ment to the area. Resi­den­tial building has spread west of the River Crane into the brough of Hillingdon. Its planners call the new locality Cranford Cross.

According to the 2011 census, 58 per cent of Cranford’s residents are of Asian origin and the dominant faiths are Sikhism, Islam and Hinduism. There is also a small Somali community of around 150 souls (as gazetteers tradi­tion­ally used to put it).

The former White Hart pub has been called “the birthplace of skiffle” because the earliest exponents of this genre, the Crane River Jazz Band, rehearsed in a neighbouring hut and performed regularly in the pub in 1949.

* The picture of the Cranford Park stable block at the top of this page is adapted from an original photograph, copyright Andrew Bowden, at Flickr, made available under the Attribution-ShareAlike 2.0 Generic Licence. Any subsequent reuse is hereby freely permitted under the terms of that licence.