A Docklands Light Railway station on the Isle of Dogs, located just to the east of Millwall inner dock 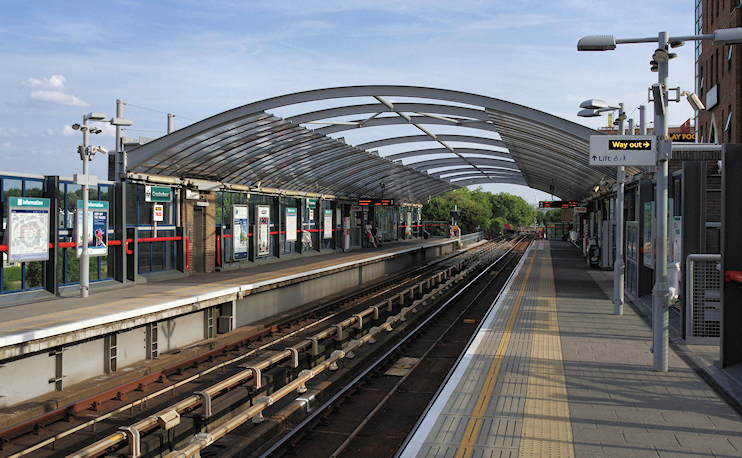 The Crosshar­bour name is a reference to Glengall Bridge, which orig­i­nally carried Glengall Road (now Pepper Street) across Millwall inner dock, via a pair of ‘knuckles’ protruding into the dock on either side. The bridge’s construc­tion was a conces­sion by the devel­opers to obtain planning approval for the dock when it was built in 1868.

The London and Blackwall Railway’s Millwall Docks station operated from 1871 until 1926 at a site a fraction to the north of the present Crosshar­bour DLR station, which is shown in the photo­graph above.*

The over-compli­cated hydraulics of Glengall Bridge failed repeat­edly and in 1945 it was replaced with a concrete-filled barge, moored between the knuckles as a pontoon for pedes­trians. For years after­wards all manner of options – including a tunnel and a cable car – were debated as a permanent solution before a high-level bridge opened in 1965.

In the late 1960s the Fred Olsen shipping line put up two massive ware­houses on the east quay of the Millwall inner dock to store fruit and tomatoes from the Canary Islands. The northern warehouse, known as J Shed, was refur­bished and extended in 1984 at a cost of £7 million – but the value of the site was by then increasing so rapidly that within four years the building had been demol­ished and replaced by the nine-block Harbour Exchange complex. Around the same time, K Shed (or Olsen Shed 2) was converted into the London Arena, a business and enter­tain­ment venue hosting concerts, ice shows and sporting events. It was not a success and has also since been demol­ished and replaced. The most signif­i­cant new structure on the arena’s site is the twisty Baltimore Tower.

Meanwhile, the high-level Glengall Bridge proved a failure in every respect and it was demol­ished by the London Docklands Devel­op­ment Corpo­ra­tion in 1983. Two short-term replace­ments were succeeded by the present Dutch-style double-leaf bascule bridge, which opened in 1990 and is shown in the photo­graph below.* 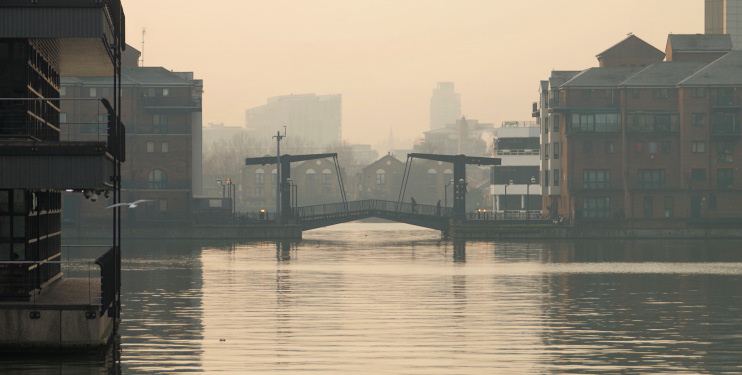 Several commen­ta­tors have noted Glengall Bridge’s resem­blance to the former Langlois draw­bridge at Arles, which – partly because of its Dutchness – inspired a series of paintings and drawings by Vincent Van Gogh.

To the south of the Crosshar­bour connec­tion, the Glengall Bridge estate, completed in 1991, provided more than half a million square feet of resi­den­tial, commer­cial and retail space on either side of the inner dock.

More skyscrapers have appeared since local planners accepted a trade-off that permitted great height in return for generous ‘plazas’ at ground level, when earlier restric­tions had tended to result in shorter, fatter devel­op­ments that squeezed the neigh­bouring public realm to an absolute minimum.

In the vicinity of Crosshar­bour station, East Ferry Road is the dividing line between modern Millwall to the west and old-style Cubitt Town to the east, where in 1969 Tower Hamlets council completed the St John’s estate of flats, maisonettes and a few houses. The project had been begun 17 years earlier by Poplar council and was beset by a series of hiatuses and delays – including one caused by a shortage of glass.

Asda’s Isle of Dogs super­store (located at the bottom right of the map below) was the most prominent new structure in the southern half of the peninsula when it opened in 1983. How times have changed since then.

James Bond’s Q‑boat dives beneath Glengall Bridge’s bascules in the waterborne chase sequence in The World Is Not Enough.

* The pictures of Crossharbour DLR station and Glengall Bridge on this page are both modified from original photographs, copyright Matt Buck at Flickr, made available under the Attribution-ShareAlike 2.0 Generic Licence. Any subsequent reuse of either image is freely permitted under the terms of that licence.