Now an outpost of Thamesmead, this was an isolated spot when Victorian engineers chose it as the site for one of their grand public engineering projects 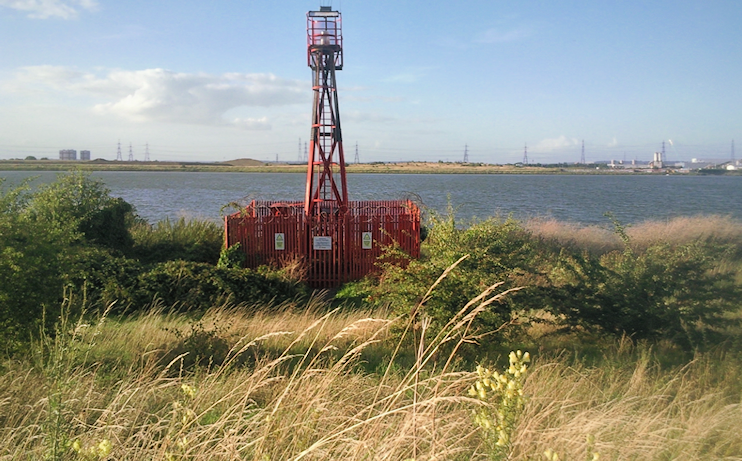 The original Cross Ness is a promon­tory in what is now north-east Thames­mead. Cross Ness’s name does not seem to have appeared in print before the early 19th century and its deriva­tion is uncertain – but presum­ably a cross once stood here. A ‘ness’ is a headland and the term has the same root as the word ‘nose’. The photo­graph above shows Cross Ness Light,* and its location is marked with a light­house symbol on the map below.

Sewage pollution had become a serious health hazard in London by the mid-19th century and the ‘great stink’ of 1858 finally persuaded parlia­ment to act.

Joseph Bazal­gette and his colleagues devised and built a network of sewers that carried the city’s waste water to two huge pumping and filtra­tion stations on either side of the Thames, east of the metro­pol­itan conurbation.

At the northern edge of the Erith marshes, the four massive engines of Crossness pumped effluent into a reservoir that held 25 million gallons.

Opened by Prince Albert in 1865, the building was designed in ornate Romanesque style in gault brick, orna­mented inside with painted ironwork.

The old engines were decom­mis­sioned at the end of the 1950s and the machinery fell victim to rust and vandalism. Its dete­ri­o­ra­tion continued until the estab­lish­ment of the Crossness Engines Trust in 1985.

A team of volun­teers progres­sively restored the old machinery and began to show the results to the public in 2001, with an accom­pa­nying exhi­bi­tion on the history of sani­ta­tion, housed in the only grade I‑listed indus­trial building in south-east London.

Funding from a number of sources, including the Heritage Lottery Fund and English Heritage, has recently enabled a programme of further improve­ments, primarily some struc­tural repairs and enhanced visitor facil­i­ties. After a long period of closure to the public except on occa­sional Sundays, Crossness reopened in July 2016. See the trust’s website for the latest infor­ma­tion on forth­coming ‘public steaming days’.

Thames Water now uses modern tech­nology elsewhere on the site, which it continues to expand, notably with the construc­tion in 1998 of the sewage sludge incin­er­ator, which is shown in the photo­graph on the right.

As with all waste water plants there are problems with bad odours and hundreds of sprays have been mounted around the works to squirt perfume into the air on hot days.

The surrounding marshland is a 50-acre wetland nature reserve and Thames Water has made use of redundant concrete pilings to create an arti­fi­cial cliff with nesting ledges for birds and a bat cave behind. Most of the nature reserve is freely open to the public but a fenced area is restricted to members of a ‘friends scheme’.

* The pictures of Cross Ness Light and the Crossness sludge incinerator on this page are adapted from original photographs, copyright Marathon, at Geograph Britain and Ireland, made available under the Attribution-ShareAlike 2.0 Generic Licence. Any subsequent reuse of these images is hereby freely permitted under the terms of that licence. The photo of the Prince Consort engine is copyright Hidden London.