A contrasting community of council blocks and early Victorian villas in west Dalston, separated from Hoxton by the Regent’s Canal 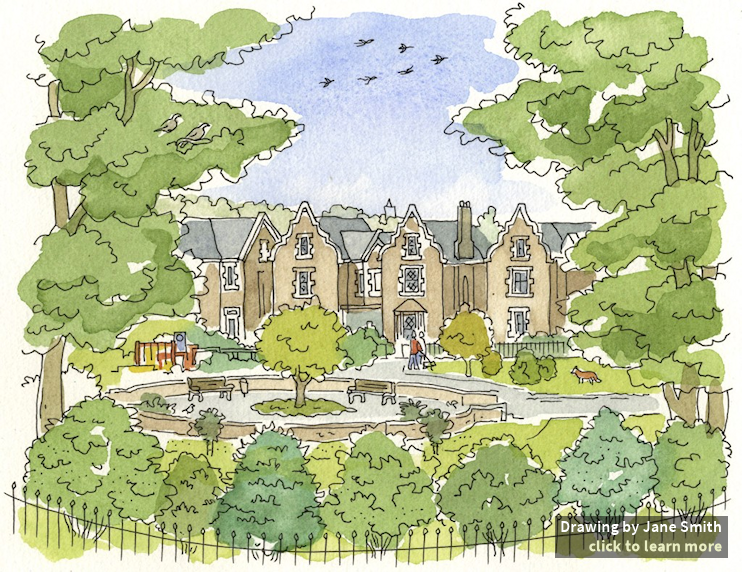 In 1640 Richard de Beauvoir bought a large farm here called the Balmes estate. The land remained in agri­cul­tural use until dense but piecemeal devel­op­ment began in the 1820s, prompted by the cutting of the Regent’s Canal. From the late 1830s Richard Benyon de Beauvoir laid out a more spacious estate centred on De Beauvoir Square (shown in Jane Smith’s drawing above) and its civilised propor­tions made it popular with wealthy commuters to the nearby City.

In 1841 St Peter’s church was built in the parish of West Hackney at the expense of Richard Benyon, who wanted it to “enhance the character and add lustre to the new estate.” St Peter’s became a parish in its own right in 1869.

The 20th century brought multi-occu­pa­tion of many of the prop­er­ties, while small factories filled parts of the area, espe­cially in the south-east corner around Kingsland basin. In the 1960s Hackney council demol­ished nearly a third of the original estate to build low- and high-rise flats. Since then, desig­na­tion as a conser­va­tion area and a vigorous local campaign have made the most of what remains. De Beauvoir Square is well-preserved except on the east side, with the result that the Lockner Road flats have the best view.

The main streets that border De Beauvoir now exhibit the typical Hackney mix of low-rent shops and service indus­tries accom­pa­nied by ever-increasing indi­ca­tions of gentri­fi­ca­tion, like the De Beauvoir Deli Company, which opened on Southgate Road in 2009. At the south-west corner of the locality, just inside the Islington border, the Rosemary Branch is a pleasing pub with a studio theatre in what was once a Victorian music hall.

At De Beauvoir primary school on Tottenham Road, 15 ethnic groups are repre­sented in varying propor­tions and most pupils speak English as an addi­tional language, according to a 2012 report by the educa­tional standards agency Ofsted. An excep­tion­ally high number of pupils join and leave the school at other than the usual entry times.

De Beau­voir’s most famous recent resident was William Lyttle, who became known as the Mole Man. Having inherited a 20-room Victorian house on Mortimer Road in the 1960s, Lyttle began digging downwards and then outwards in several direc­tions. Over a 40-year period he removed an estimated 3,500 cubic feet of soil, almost causing the property to collapse and bringing the risk of subsi­dence to nearby roads.

Lyttle claimed he’d simply got carried away while creating a wine cellar and had ended up with nothing more than “a big basement.” Uncon­vinced, Hackney council evicted the Mole Man in August 2006 to allow work to stabilise the house and in April 2008 presented him with a repair bill for nearly £300,000, which he did not pay.

William Lyttle died in June 2010 and two years later his derelict house was sold at auction for £1.12m, with planning permis­sion for it to be replaced by two three-storey town­houses with gardens and conven­tion­ally propor­tioned basements.