A primarily Edwardian estate situated in the north-east of Eltham 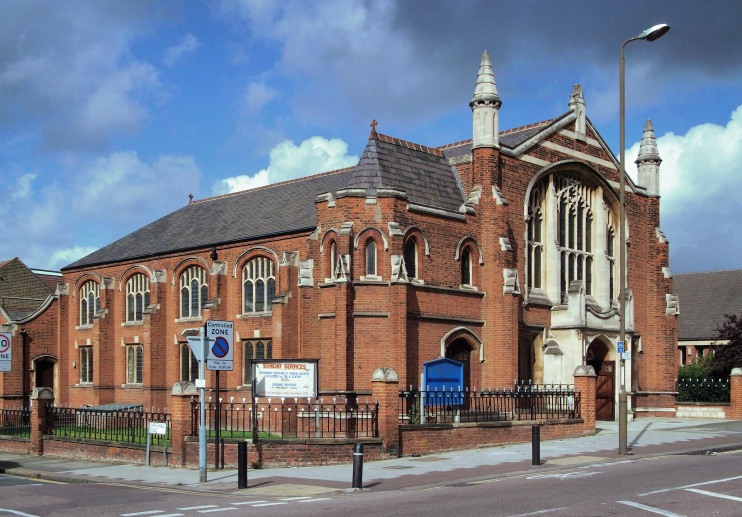 Although evidence of Roman occu­pa­tion has been discov­ered in present-day Glenesk Road, the area remained virtually unde­vel­oped until a mansion called Park Farm Place (later Eltham Park House) was erected in the 18th century.

The last private owner of the mansion and its adjoining farmland was Thomas Jackson, a civil engineer involved in the building of the Bexley Heath Railway, who died shortly before the line opened. His widow died in 1899 and the Roman Catholic Diocese of Southwark acquired Eltham Park House. The building served a succes­sion of purposes, including a children’s home, a boys’ school, a convent and a girls’ school. Repeated alter­ations and exten­sions to the mansion mean that very little of its earlier form is now discernible.

The surrounding land was bought by Archibald Cameron Corbett, the kingpin of suburban house­building in eastern London at that time. Corbett developed the Eltham Park estate between 1900 and 1914 – and allocated sites for churches to be built. The first to be dedicated was Eltham Park Baptist church, on Good Friday 1903. Shown in the photo­graph above,* Eltham Park Methodist church opened for worship in 1906 and St Luke’s followed a year later. All three churches are on Westmount Road.

Cameron Corbett was a proud Scot and he habit­u­ally named the streets of his devel­op­ments after places and geograph­ical features in his homeland. Richard Gregory explains the local specifics in The Story of Royal Eltham (1909), including the following highlights:

A station opened in 1908, orig­i­nally named Shooters Hill and Eltham Park. The most expensive houses were built near the station but out of earshot of the trains, and had servants’ quarters. Cheaper prop­er­ties were built close to the railway line or on the estate’s fringes.

Cameron Corbett was a strict teeto­taller and he imposed a covenant that prohib­ited the sale of alcoholic beverages anywhere in Eltham Park. No public houses were allowed and when an off-licence even­tu­ally opened it was situated on the bridge over the railway, not on Corbett’s land.

Many of Eltham Park’s early residents worked at Woolwich Arsenal or at other military estab­lish­ments in the area and rented their homes at reason­able prices. From 1910 a tram service provided a direct link with Woolwich.

The original Rochester Way came through the north of the district in 1932, and in the 1980s the estate was split more ruth­lessly by the relief road (A2) that was cut alongside the railway line. The road also cut the neigh­bouring public park in two. Eltham Park North is the more picturesque part, except when the blossom is out in Eltham Park South, as shown in the photo below. 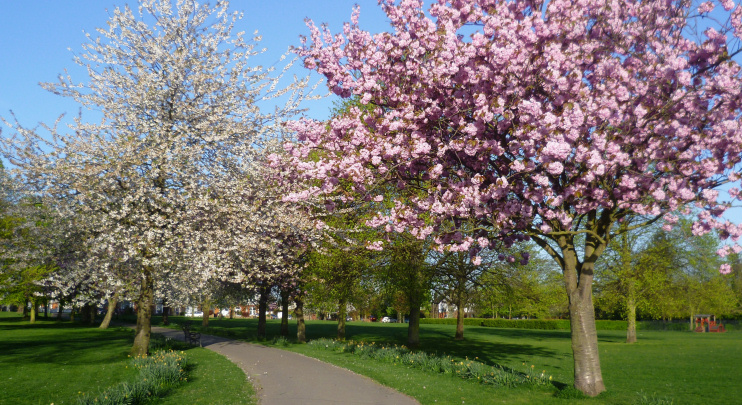 St Mary’s Catholic primary school moved from Eltham High Street to the Eltham Park House site on Glenure Road in September 1984. A portion of the land was sold for sheltered housing and a former staff accom­mo­da­tion block in the school grounds became a convent, and later a ‘house of formation’ for the Institute of Our Lady of Mercy.

Cameron Corbett’s power to prevent the sale of alcohol in Eltham Park lapsed with a change in the law in 2005. One conse­quence of this eman­ci­pa­tion was the opening in December 2014 of The Long Pond, a so-called ‘micropub’, at 110 Westmount Road.

The comedian Bob Hope was born in Craigton Road in 1903, and was christened Leslie Towns. The family migrated to America when he was four years old, settling in Cleveland, Ohio.

* The picture of Eltham Park Methodist church at the top of this page is adapted from an original photograph, copyright David Anstiss, and the picture entitled Blossom time in Eltham Park South is adapted from an original photograph, copyright Marathon, both at Geograph Britain and Ireland, made available under the Attribution-ShareAlike 2.0 Generic Licence. Any subsequent reuse of the images is hereby freely permitted under the terms of that licence.