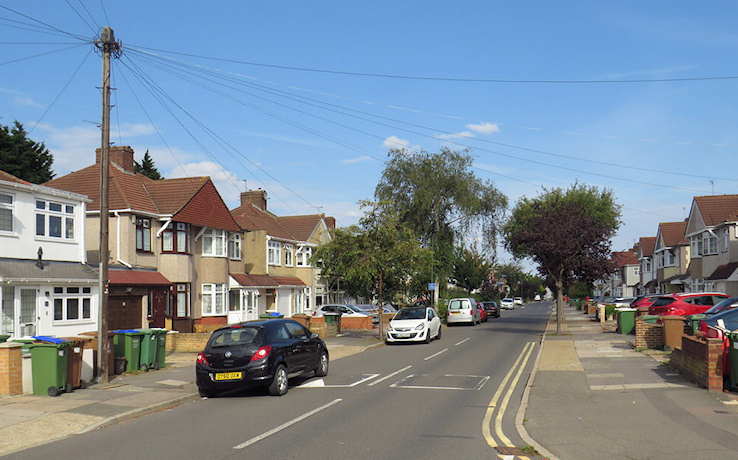 Falcon Wood was part of Eltham Palace’s extensive parkland from medieval times, and its name was said to have derived from the Plan­ta­genet kings flying their falcons here. After the Civil War the trees were felled for use in ship­building. From 1867 until 1955 a mansion named Falcon­wood stood on the east slope of Shooters Hill.

Until the late 19th century most of the present settle­ment of Falcon­wood was covered by West Wood, which was owned by Oxford Univer­sity, lords of the manor of Bexley. This woodland was cleared in 1895 and replaced by Westwood Farm.

In the early 1930s the farm was acquired by New Ideal Home­steads (NIH), south-east London’s pre-eminent suburban house­builders, for the creation of a south-westward extension of Welling. Although it would obviously have been more correct to call the devel­op­ment ‘Westwood’, NIH must have wanted something more distinc­tive. They orig­i­nally went for ‘Falcon­wood Park’ (they rarely built an estate without appending the word ‘Park’ to its name), but the suffix didn’t stick.

NIH erected over 2,000 prop­er­ties at a total construc­tion cost of £1.5 million, offering detached houses with two reception rooms, three bedrooms, a bathroom and a separate lavatory from an econom­ical £559. Wimpey and Wates also built some homes in the vicinity.

The mock-Tudor shops and amenities of the Green covered the site of Westwood farmhouse. NIH contributed substan­tially to the cost of the ‘func­tional and fash­ion­able’ station, which opened long after the rest of the Bexley­heath line, on New Year’s Day in 1936. The booking office’s art deco archi­tec­ture no longer looks very pleasing – but it still could, if some thought and funding were invested in its restoration.

Falcon­wood Field was acquired as a public open space in 1936. At the western end of Lingfield Crescent, across from the station, the Falcon pub is now a Harvester restau­rant.

Eltham Cemetery (also known as Falcon­wood Cemetery) opened in 1935 and a crema­to­rium was added in 1956, as was a remem­brance chapel said to have been designed as a tiny replica of Liverpool Cathedral. (It’s a mystery to Hidden London which Liverpool cathedral this might have been.) A series of memorial courts were opened in 1996.

Westwood infant, junior and secondary schools were estab­lished around the same time as the first homes were built. The infant and junior schools have since become Bishop Ridley Church of England primary school while the secondary school is now the Harris Academy Falcon­wood, which came into existence in 2009 and moved into new buildings in 2011.

Falcon­wood community centre was opened in 1954. Four years later, Bishop Ridley church was completed. The church, which is small but with an airy interior, is located on the other side of Falcon­wood Parade from the community centre.

In Bexley’s Falcon­wood and Welling ward, 88% of homes are owner-occupied. Although the number of black and Asian residents almost tripled between 2001 and 2011, this increase was from a small base. The over­whelming majority of residents are still white British.

* The picture of Northumberland Avenue, Falconwood, on this page is slightly modified from an original photograph, copyright Malc McDonald, at Geograph Britain and Ireland, made available under the Attribution-ShareAlike 2.0 Generic Licence. Any subsequent reuse is freely permitted under the terms of that licence.