A mid-market ‘executive estate’, mostly built by Barratt in the late 1990s, located between Oakwood and Grange Park (though many residents prefer to consider this the north-west corner of Winchmore Hill) 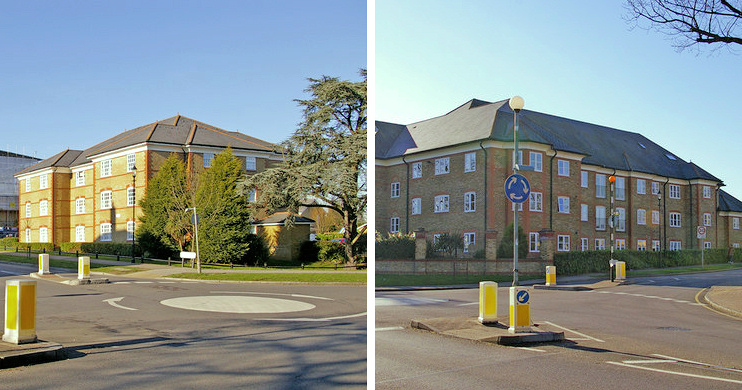 In 1883 the Metro­pol­itan Asylum Board acquired 36 acres of the Chaseville estate and took advantage of the remote setting to erect a hospital for patients with conta­gious diseases. Orig­i­nally called the Northern Hospital, but known locally as the pest-house, it was arranged in a street of pavilions winding around a central admin­is­tra­tion block. The neigh­bouring Enfield Isolation Hospital opened in 1900.

In 1948, when the National Health Service was created, the Northern became a district general hospital and was renamed Highlands to avoid confusion with the Royal Northern Hospital, with which it had been grouped in the NHS organ­i­sa­tion. Enfield Isolation Hospital became South Lodge.

Following the closure of the hospitals, the main Highlands block was demol­ished in 1997 and the surviving Queen Anne style buildings, in red and yellow brick, were converted into apartment blocks as the centre­piece of a new ‘village’. Around these lie a series of short cul-de-sacs of sympa­thet­i­cally styled houses. The village’s amenities include a community centre, nursery and surgery. A Sainsbury’s super­store replaced South Lodge.

Pennington Drive, the development’s main thor­ough­fare, is named after Nathan Glossop Pennington, the hospital’s leading architect, who was also respon­sible for several public buildings in his home city of Manchester.

Situated across World’s End Lane from the village, Highlands school was the first new secondary school in the country to be built entirely through the private finance initia­tive. The school was opened in 2001 by prime minister Tony Blair.

At 41.3 years, the mean age of residents of Highlands ward is signif­i­cantly older than the national and borough averages, partly because this is a favoured locality for nursing homes. According to the 2011 census, 83 per cent of Highlands’ residents are white, of whom more than three-quarters are white British. The two largest minority groups, each accounting for 4 per cent of the total popu­la­tion, are of Greek and Indian heritage.

Highlands Hospital did important work with victims of encephalitis lethargica, a form of sleeping sickness portrayed in the 1990 movie Awakenings, which was based on a true story. Robert de Niro visited the hospital in preparation for his much-praised role in the film.

The pictures of the roundabout at the junction of Tresilian Avenue and Worlds End Lane and Blake Court, Highlands Avenue, at the top of this page are both adapted from original photographs, copyright Christine Matthews, at Geograph Britain and Ireland, made available under the Attribution-ShareAlike 2.0 Generic Licence. Any subsequent reuse is freely permitted under the terms of that licence.