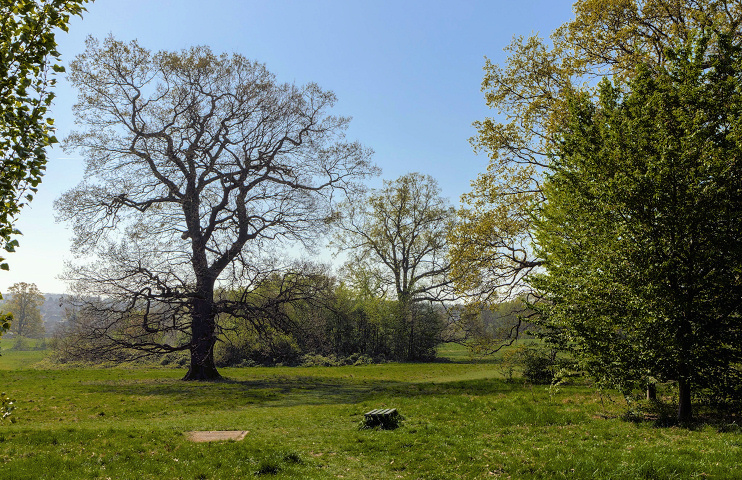 This was part of the woodland of Enfield Chase, which in the 13th and 14th centuries belonged to the De Bohun family, whose name is still visible in these parts.

In 1870 Samuel Sugden, a home­o­pathic chemist, bought land here, renovated a farmhouse and renamed it Oak Lodge and added a walled garden and an orchard. He also built an igloo-shaped ice house in the grounds, which survives today. Oak Lodge was demol­ished around 1920. Southgate council acquired the lodge’s 64 acres of grounds and invented the name ‘Oakwood’ for the park it opened in 1927 and which is shown in the photo above.*

The London Electric Company extended the Piccadilly line to Cock­fos­ters in 1933 and Charles Holden built the station here, which was at first called Enfield West and is now grade II* listed.

Oakwood school opened in the same year as the station but it was another couple of years before serious house­builders ventured this far north. John Laing and Company then began to develop the South Lodge estate and by the outbreak of the Second World War most of modern Oakwood had taken shape. Some of the more luxurious homes are in the style known as ‘stock­broker Tudor’, with oversized eaves and chimneys.

St Thomas’s parish church was built in 1941, on Prince George Avenue. The architect was the quaintly named Romilly Craze, who specialised after the war in repairing or rebuilding damaged churches for the Diocese of London.

More shops were added in the vicinity of the station in the 1950s and the council built a housing estate in the area around Green Road and Reservoir Road, to which it has recently made improvements.

In 1967 Oakwood school was absorbed into Southgate school, which is now based at a single site on Sussex Way. West Grove primary school opened in 1998. The school has a large number of pupils of Mediter­ranean descent, including Greek, Greek and Turkish Cypriot and Italian, as well as a variety of non-European ethnic minori­ties. At De Bohun primary school the main home languages spoken after English are Turkish, Somali and French.

Oakwood Park has an avenue of scarlet oak trees, which were planted annually by the mayor from 1945 until recently. Original field boundaries can still be seen from when the area was farmland.

The picture of the oak tree in Oakwood Park (near the Prince George Avenue entrance) at the top of this page is modified from an original photograph, copyright Christine Matthews, and the picture of the pole-mounted roundel at Oakwood station is adapted from an original photograph, copyright Julian Osley, both at Geograph Britain and Ireland, made available under the Attribution-ShareAlike 2.0 Generic Licence. Any subsequent reuse of either image is freely permitted under the terms of that licence.