Honor Oak’s south-eastern neighbourhood, situated between Brockley’s Crofton Park locality and Forest Hill – and often considered to be part of one or other of those places 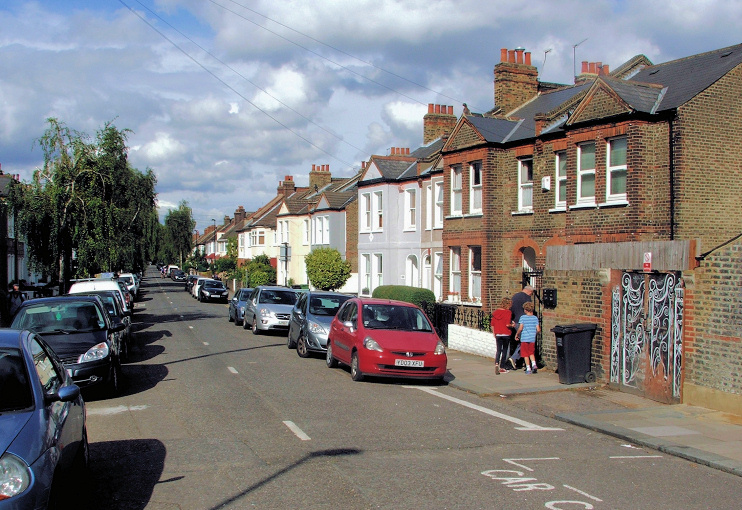 There was nothing here but fields bordered by inter­mit­tent trees until the Croydon canal meandered through in the early years of the 19th century. The only east-west track across the area was St German’s Road (later renamed Honor Oak Park), which connected with the only north-south route, Brockley Lane (now Brockley Rise).

The Croydon canal was never prof­itable and it closed in 1836. Three years later, the London and Croydon Railway opened, passing through the Brockley Cutting on a straight­ened version of the canal’s route. In 1846 the L&CR merged with other railways to form the London Brighton and South Coast Railway. However, no station was at that time provided in this locale.

To the south, much of Forest Hill was built up by the 1850s, but its extent stopped abruptly at Ewart Road, now Ewart Road and Firs Close (at the bottom of the satellite map below).

The Anglican church of St Augustine was built on One Tree Hill in 1872–3, using Kentish ragstone. The church’s Gothic Revival design was the work of the London-based architect William Oakley. The tower was completed in 1888. As Basil Clarke says in Parish Churches of London, and Historic England repeats in its grade II list entry for St Augustine’s, “The church stands in a fine position [almost] at the top of a wooded hill, its design enhanced by the picturesque setting.”

The area’s house­builders contributed £1,000 towards the cost of constructing Honor Oak Park station, which opened in 1886. Devon­shire Road, Lessing Street and Wyleu Street were among the earliest streets to be lined with terraced homes. Several more followed within a decade, including the southern half of Grierson Road, which is shown in the photo­graph at the top of this article.*

A Wesleyan Methodist church was built on Brockley Rise, at the corner of Ackroyd Road, and the Chandos Arms public house opened on the corner of Codrington Hill. The latter survives, as the Chandos. The last vestige of the old canal did not disappear until the turn of the century, when Boveney Road was laid out. The streets north of Riseldine Road were not built up until after the First World War.

Several sites in the area have been rede­vel­oped in recent decades, most inter­est­ingly at Segal Close, to the south-east, and Walter’s Way, to the west. These are both named after Walter Segal, who pioneered low-cost low-skill construc­tion methods ideally suited to self-build projects. Lewisham council supported the schemes, which served as a model that was subse­quently adopted by several other English councils, if only for a while.

Faced with a dwindling congre­ga­tion and the need for expensive repairs, St Augustine’s closed for worship in 2001 but the priest-in-charge at Holy Trinity, Sydenham, succeeded in his efforts to reopen the church two years later – and essential main­te­nance work has since been done.

East of Brockley Rise, Guy’s Hospital’s former sports ground is now King’s College London’s Honor Oak Park amenity, also available for hire. Monies raised from the college’s sale of a ground in Surrey to Chelsea football club helped fund a £4m upgrade of the facil­i­ties here, including the replace­ment in 2013 of the old clubhouse with a new pavilion, shown in LTS Archi­tects’ image above.

London Over­ground assumed respon­si­bility for Honor Oak Park station in 2009, in prepa­ra­tion for the arrival of its services the following year, on the extended East London line.

Wells’ fireworks were made in Honor Oak Park from 1878 until 1947. The factory was located immediately north-west of the station.

* The picture of Grierson Road at the top of this page is adapted from an original photograph, copyright Chris Whippet, at Geograph Britain and Ireland, made available under the Attribution-ShareAlike 2.0 Generic Licence. Any subsequent reuse is freely permitted under the terms of that licence.