The south-western part of Kilburn, situated between Kilburn High Road and West Kilburn 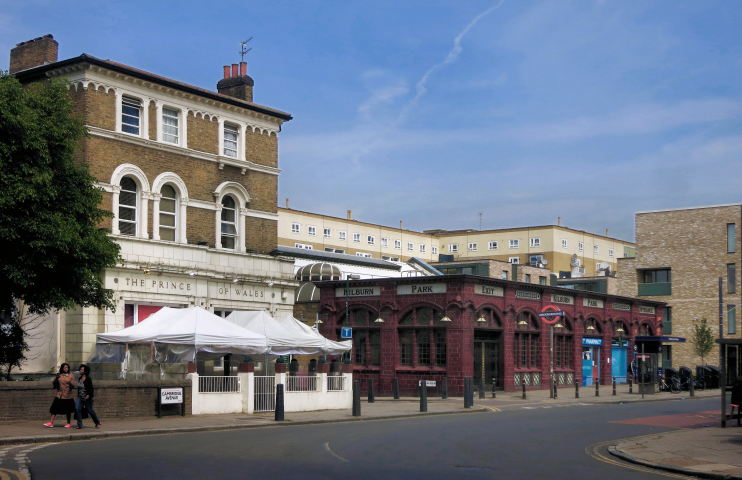 The area may have been part of Kilburn Abbey’s lands in the Middle Ages but the ‘Park’ element of the name was merely a builders’ invention.

In 1850 the Reverend Edward Stuart sold 47 acres here to a consor­tium of five devel­opers, of whom the largest was James Bailey. They laid out roads and sewers and divided the site among them­selves, sublet­ting to smaller firms who built a few houses each.

Several of the contrac­tors aimed high with their early efforts but the isolated, muddy location failed to attract buyers and the estate remained incom­plete for several decades.

In the absence of middle-class residents, prop­er­ties were soon subdi­vided, some containing as many as six house­holds in the 1870s – a time when the Reverend RC Kilpatrick commis­sioned an extra­or­di­nary church for Kilburn Park.

St Augustine’s is one of the most breath­taking Victorian churches in the whole of England, a fusion of French-inspired detailing and Anglo-Catholic tradition, with a soaring steeple. The body of the church was complete by 1877 but it was another 20 years before the spire reached its full height of 254 feet. St Augustine’s has been nicknamed ‘the cathedral of north London’.

Perhaps the church gave Kilburn Park the cachet it had previ­ously lacked, for the remainder of the estate was built up in the late 1880s. The Bakerloo line reached Kilburn Park in 1915.

Much of the area was damaged by Second World War bombing and was after­wards subject to wholesale rede­vel­op­ment and the addition of several council tower blocks – but St Augustine’s still soars above them.

Nowadays, the vicinity of Kilburn Park and Kilburn High Road stations is frequently referred to as ‘North Maida Vale’, espe­cially by estate agents. Hidden London considers this ridicu­lous but it is the kind of thing that happens quite often when a locality has a rela­tively poor repu­ta­tion but a nearby area has a much more pres­ti­gious name.

The cyclist Sir Bradley Wiggins grew up at Dibdin House, a block of 250 working-class flats built in 1937 at the Kilburn end of Maida Vale (visible on the right in the satellite map below). He was educated at St Augustine’s CE high school, where his mother was a secretary.

* The picture of the Prince of Wales and the Station at the top of this page is slightly adapted from an original photograph, copyright Des Blenkinsopp, at Geograph Britain and Ireland, made available under the Attribution-ShareAlike 2.0 Generic Licence. Any subsequent reuse is hereby freely permitted under the terms of that licence.