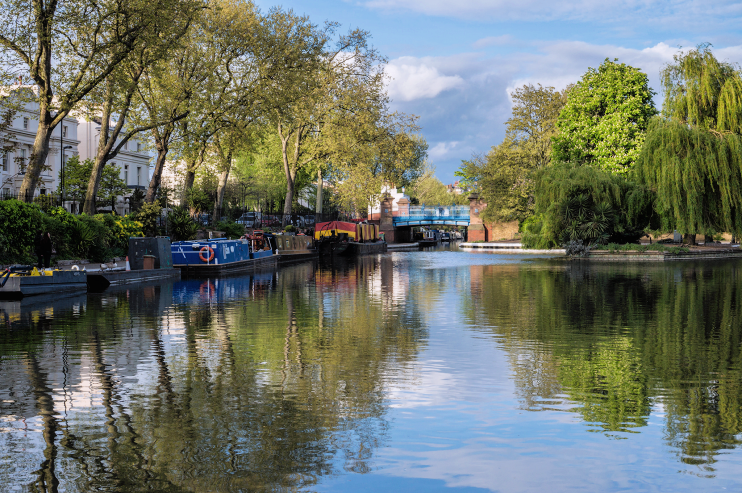 A pool was created here in the 1810s at the meeting point of the Regent’s Canal and the Paddington arm of the Grand Junction (now Grand Union) Canal, and was orig­i­nally known as Paddington Broad­water. A small island with willows and wildfowl makes a kind of round­about at the junction, which was always intended as a spot for pleasure boats. The islet is nowadays known as Brown­ing’s Island, after the poet Robert Browning, who lived nearby.

The neigh­bouring area was built up in a piecemeal but harmo­nious fashion from the second quarter of the 19th century, espe­cially with terraces and pairs of three-storey stuccoed houses.

In her 1934 detective novel Death of a Ghost, Margery Allingham gave the name ‘Little Venice’ to a house over­looking the canal. The name caught on with estate agents after the Second World War and is still much used for the pricey prop­er­ties in the locality.

The locality bears little actual resem­blance to Venice and the incon­gruous 1960s flats on Warwick Crescent mar its charm but the jolly house­boats moored along the canal­sides lend Little Venice a picturesque appearance.

Artists’ studios on the east side of the pool were demol­ished and replaced by a small park, named Rembrandt Gardens in 1975 to commem­o­rate the 700th anniver­sary of the founding of the city of Amsterdam, the ‘Venice of the North’. Public walkways were opened on both sides of the pool around this time.

Most of Little Venice was part of the Maida Vale estate belonging to the Church Commis­sioners, who offered the freeholds for sale in the 1980s, when a number of houses were bought by property companies and converted into flats.

The Puppet Theatre began staging mari­onette perfor­mances in a converted barge in 1982. The vessel seats 55 and its red and yellow awning is visible in the photo­graph at the top of this article.* During the summer, the floating theatre makes a tour of the Thames but it’s usually in Little Venice from October to July.

Organised by the Inland Waterways Asso­ci­a­tion, the Canalway Cavalcade takes place over the early May bank holiday weekend. This colourful festival has been held annually (except in 2020) at Little Venice since 1983.

More than half the adult popu­la­tion of Little Venice is qualified to degree level or higher. The ward has rela­tively high numbers of Arab and Kurdish residents. Also, a signif­i­cant propor­tion of Little Venice’s inhab­i­tants come from Australia, New Zealand, North America and conti­nental western Europe – including 161 from Italy (but Venetians are not sepa­rately enumer­ated in the census data).

Short-​​story writer Katherine Mansfield, playwright Christopher Fry, novelist Elizabeth Jane Howard and Icelandic chanteuse Björk are among those who have had homes in Little Venice.

* The picture of Little Venice at the top of this page is slightly modified from an original photograph, copyright Andrew H, at Flickr, made available under the Attribution 2.0 Generic Licence. Any subsequent reuse is hereby freely permitted under the terms of that licence.