Situated where Clerkenwell meets King’s Cross, this is a classy and well-preserved late-Georgian and Victorian estate consisting of a handful of terraced streets and two squares 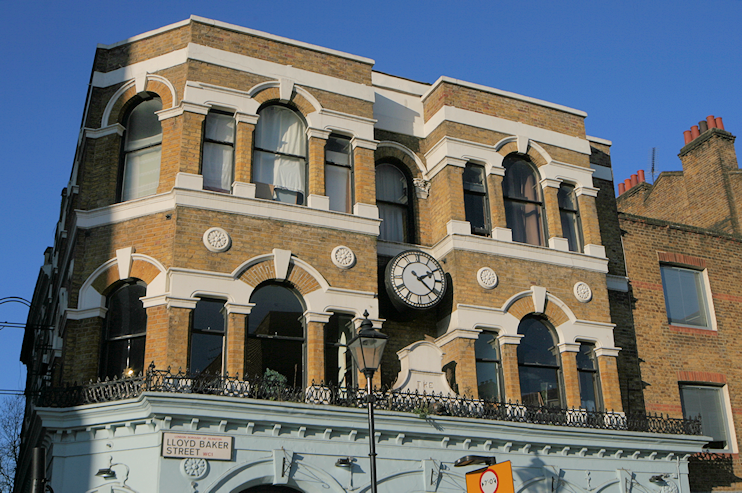 The land here was owned by the Knights Hospi­taller, and it passed sometime around the 1680s to Dr William Lloyd, who was then bishop of St Asaph. He was one of the seven bishops committed to the Tower in 1688.

A public house has stood on the site of the present Union Tavern (shown in the photo­graph above) since the 1740s, when it was variously known as the Black Bull and the Bull in the Pound. It lay across the Fleet river (which now runs beneath King’s Cross Road here) from Bagnigge House, which was said to have been the summer residence of Nell Gwynne and became a spa resort in 1758.

The estate was given as part of the dowry of William Lloyd’s great-grand­daughter Mary when she married the Glouces­ter­shire vicar William Baker in 1775. By then much of the land behind the tavern was occupied by a brick- and tile-works that excavated the slope of the Fleet valley here, creating a steeper incline.

The pub gained its modern identity early in the 19th century, presum­ably honouring the 1801 union of the kingdoms of Great Britain and Ireland. The Union Tavern seems to have gone upmarket when it was rebuilt in 1819–20. Writing soon after­wards, Thomas Cromwell noted “a respectable tavern and tea gardens, called the Union, where was formerly a public house of vulgar fame.”

The tavern’s renais­sance was the first step in – and perhaps the catalayst for – the devel­op­ment of the Lloyd Baker estate on the site of the former brick­field and beyond it. The Reverend Baker and his son Thomas Lloyd Baker commis­sioned a plan from their surveyor John Booth, who delegated most of the archi­tec­tural work to his son William.

The estate’s first houses were built by the Union Tavern’s landlord on Bagnigge Wells Road (now King’s Cross Road) but none of these remain.† The earliest surviving prop­er­ties went up in the mid-1820s along Baker Street (since renamed Lloyd Baker Street, to avoid confusion with its better known namesake to the west) and Wharton Street. Here, William Booth designed elegant terraces of semi-detached, two-storey villas that were built in London stock brick and surmounted by shared Grecian pediments.

Lloyd Street and Lloyd Square were laid out in the early 1830s. The latter has a central private garden surrounded by very grand, though compact, houses that are similar in style to their predecessors.

The three-storey terraces of Granville Square were built in the early 1840s. The archi­tec­ture here is less imposing than elsewhere on the estate, but still very fine.

Several buildings and the Union Tavern’s gardens had to be sacri­ficed when the Metro­pol­itan Railway came through in the early 1860s. Collat­eral damage to the tavern itself prompted its complete recon­struc­tion in 1877–8. At the same time, the shops at numbers 2a and 2b King’s Cross Road replaced a brewhouse and stables.

On the east side of Lloyd Square, the Kentish architect Ernest Newton built a house of retreat for the Sisters of Bethany in 1882–4, which was extended c.1905 and 1935. The retreat’s main building is now called Bethany House and is owned by Sapphire Inde­pen­dent Housing – which provides support and accom­mo­da­tion for vulner­able people, at this location for women only.

At the far northern tip of the estate, the flats of Cable House were built in 1948 after wartime bombing had wrecked the original homes at the corner of Lloyd Street and Great Percy Street.

The estate remained in the family until the death of Olive Lloyd Baker in 1975. Three years later, 95 houses were sold to the London Borough of Islington. According to the Amwell Society’s website, these were then “brought up to basic standards by, for example, installing bathrooms. [‘Miss Olive’ appar­ently hadn’t had the funds to improve her prop­er­ties but did enjoy a glass of her tenants’ sherry when she visited for annual inspec­tions.] Many of the houses on the Lloyd Baker estate are still tenanted, while others, as they have become vacant, have been sold freehold and renovated.”

* The picture of Lloyd Square on this page is adapted from an original photograph, copyright Stephen McKay, at Geograph Britain and Ireland, made available under the Attribution-ShareAlike 2.0 Generic Licence. Any subsequent reuse is hereby freely permitted under the terms of that licence.
† A slightly later house does survive at No.4 King’s Cross Road. It was built in the 1830s by the Union Tavern’s landlord.