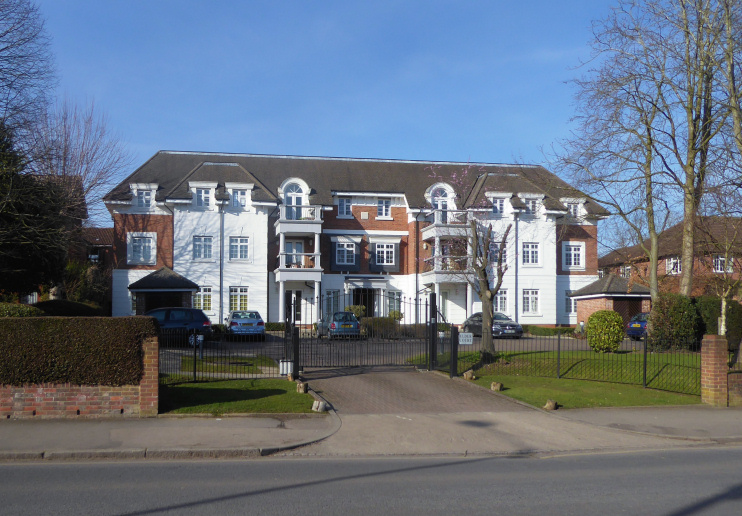 There was a manorial grange at Northwood in 1248, which may have been on the site of the present Grange on Rick­mansworth Road. From at least the 14th century there was a hamlet here, separated from Ruislip and Eastcote by Park Wood, Copse Wood and Ruislip Common.

A few cottages were recorded here in a survey of 1565 but the hamlet was slower to develop than Eastcote or Ruislip – after 200 years it consisted of only a few farms and dwellings, and by 1841 there were still just 41 occupied houses.

Northwood retained its rural character until the late 19th century with many of the inhab­i­tants engaged in supplying firewood to London as late as 1870. The main changes were the addition of Holy Trinity church in 1854 and the extension of the Metro­pol­itan Railway from Pinner to Rick­mansworth in 1887, when a station opened at Northwood. F Murray Maxwell Hallowell Carew imme­di­ately bought up a large area around the station and sold off building plots along new roads named after himself.

Further improve­ments to railway commu­ni­ca­tions brought more resi­den­tial devel­op­ment and the 1890s saw a number of large houses in their own grounds being built in the Green Lane area. Between Green Lane and Rick­mansworth Road several streets were built up with smaller houses and contin­uous terraces. Northwood College, an inde­pen­dent school for girls, came to Maxwell Road in 1892.

After 1930 the pace of devel­op­ment in the wider area accel­er­ated but much of this was south of Northwood, prin­ci­pally in Northwood Hills and Ruislip. Many of Northwood’s houses were osten­ta­tiously grand and some have since been replaced by flats. Those that survive encompass a wide range of styles, including neo-Georgian, mock-Tudor, hacienda and neo-English baroque. The most luxurious prop­er­ties tend to lie in the west of the district, which also has the London School of Theology. Infilling and ‘garden grabbing’ continue wherever devel­opers can find a vacant acre.

Northwood has a high number of pensioners living alone, consti­tuting more than a sixth of all households.

Although it was supposedly set in Surbiton, the 1970s TV comedy The Good Life was filmed at 53 and 55 Kewferry Road in Northwood. This was native soil for actor Richard Briers, who grew up in nearby Hatch End and had served at RAF Northwood, now the home of the Permanent Joint Headquarters, which is sited just across the London border in Hertfordshire’s Three Rivers district.

* The picture of Elder Court at the top of this article is adapted from an original photograph, copyright Marathon, at Geograph Britain and Ireland, made available under the Attribution-ShareAlike 2.0 Generic Licence. Any subsequent reuse is freely permitted under the terms of that licence.