A multi-ethnic neighbourhood with some light industry, almost squeezed out of acknowledged existence by Hackney, Dalston and Stoke Newington, which surround it 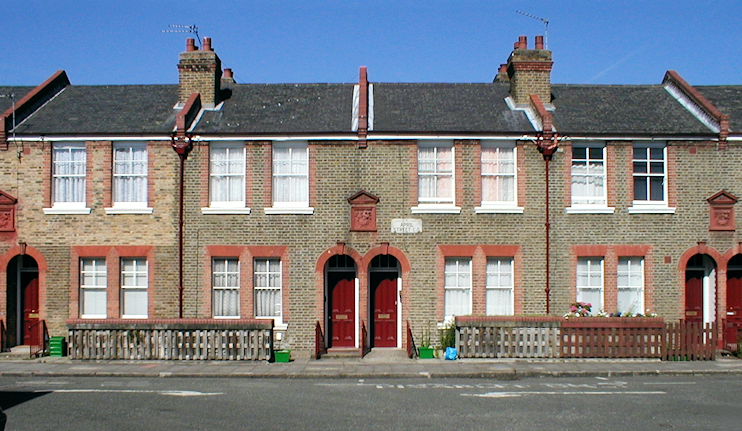 Shack­lewell’s name may refer to a well-spring in a sunken place or where animals could be shackled (tethered) and was not recorded until 1490, despite its probable Old English origin.

In the early 16th century Sir John Heron, reputedly the richest man in Hackney, owned a large estate centred on a manor house here – its site now covered by shops. Several villas for gentlemen were built during the course of the 18th century, inter­spersed with lesser prop­er­ties for tradesmen, two pubs and a dairy on the south side of the village green.

Side roads subse­quently prolif­er­ated, many lined with cramped terraces, but Shack­lewell remained an isolated settle­ment until Hackney expanded outwards to meet it in the mid-19th century. Perch, Seal and April Streets (the latter shown above) were laid out in the early 1880s with good quality terraces for working people, and Shack­lewell Green was taken into public ownership.

By the early 20th century Shack­lewell had gained a synagogue and some indus­trial premises, while a number of larger houses were being knocked down and replaced by more terraces.

The grade II* listed church of St Barnabas was built on Shack­lewell Row in 1909-11. Its neo-Byzantine archi­tec­ture (and later interior deco­ra­tion) was the work of Charles Reilly, who had attended the church’s precursor, the Merchant Taylors’ school mission.

Parts of Shack­lewell became a slum and several streets were cleared in the 1930s to make way for municipal and phil­an­thropic housing projects. More flats followed after the Second World War.

The conver­sion of the synagogue to a Turkish mosque* is an indi­ca­tion of the shift in Shacklewell’s ethnic mix in recent decades. At Shack­lewell primary school (which opened in 1951) over 80 per cent of children are from black, Indian, Pakistani, Bangladeshi, Turkish or Chinese backgrounds.

The Petchey Academy was built on the site of the former Kingsland secondary school (orig­i­nally Dalston county school) in 2006 and has a sixth form ‘univer­sity gateway’ that opened in September 2011.

Shack­lewell’s church is now home to a ‘planted congre­ga­tion’ – consisting of ‘hipster Chris­tians’, according to one source. No longer St Barnabas Shack­lewell (perhaps not hip enough) it is now St Barnabas Dalston. Under the church’s aegis, the neigh­bouring mission hall hosts community events and activ­i­ties. With its adven­turous taste in live music, the Shack­lewell Arms is almost as hip as the church – and also describes itself as being in Dalston.

* The Shacklewell Lane mosque and community centre should not be confused with the more ostentatious cinema conversion on nearby Stoke Newington Road.