The easternmost settlement in London south of the Thames, situated north of Barnes Cray 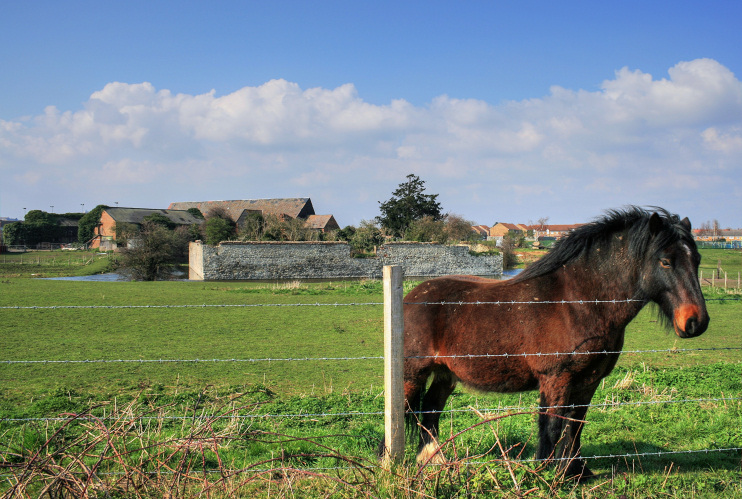 This was formerly the manor of Howbury, recorded simply as Hov in Domesday Book, from the Old English hōh, a heel of land. Slade Green was first mentioned in the 16th century, but the name is probably of earlier origin. A ‘slade’ was “a little dell or valley; or a flat piece of low, moist ground” and it was certainly the latter meaning that applied here.

The ruins and moat of the house called Howbury consti­tute a scheduled ancient monument, and a Jacobean tithe barn survives, but in dete­ri­o­rating condition. The struc­tures are on private land and are not generally acces­sible to the public but can be seen from a nearby footpath, from which the photo­graph above was taken.

Howbury’s surround­ings were fields on the edge of Crayford Marshes until indus­trial devel­op­ment began here in the late 19th century, mainly in the form of brick­making and barge-building. The bulky church of St Augustine was built in 1900, and the station opened in the same year, followed by loco­mo­tive sheds and carriage sidings. The South East and Chatham Railway Company built a small estate of railway workers’ homes and a matching public house on Oak Road. The cottages are arranged in groups of four and designed to look at first glance as though each set is a single dwelling. Prolonged railway ownership kept the Oak Road estate rela­tively unspoilt and it is now a conser­va­tion area.

The council built flats, bungalows, semi-detached houses and shops in the late 1950s. The Corner Pin pub (1844) was demol­ished and rebuilt in 1958.

The system-built flats were demol­ished around 1990 and replaced by much more pleasant housing. Bellway Homes received permis­sion to build homes off Slade Green Road in the mid-1990s in return for providing the Ray Lamb Way relief road. Barratts built the Watermead Park estate on reclaimed marshland later in the decade.

The former Slade Green secondary school now houses council offices. The area is well supplied with primary schools, including St Paul’s, Temple Grove and, to the west, Pear­eswood, each of which is part of a larger academy trust.

The local­i­ty’s former Howbury centre and its surround­ings have been rede­vel­oped as Ratio, with 372 homes “inspired by regency-style archi­tec­ture” – plus the usual smat­tering of neigh­bour­hood amenities asso­ci­ated with such schemes (although not as many as were orig­i­nally promised). Unlike most major devel­op­ments in modern London, Ratio includes a high propor­tion of three- and four-bedroom family houses, as well as the more predictable two-bedroom apartments. 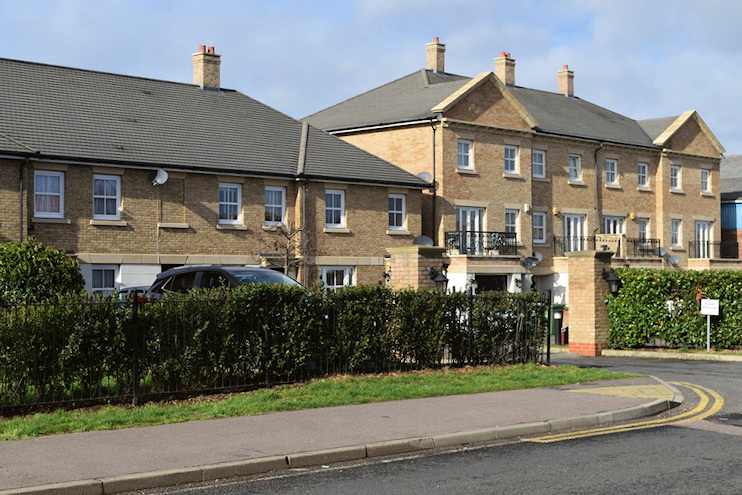 A proposal to construct a huge distri­b­u­tion park adjacent to the rail lines south-east of the station appears to be in abeyance following the Mayor of London’s rejection of a revised planning appli­ca­tion. However, the Howbury Park project may yet go ahead in some form as the site has been allocated for this purpose in the London Plan.

* The picture of new housing at the Ratio development on this page is modified from an original photograph, copyright David Martin, at Geograph Britain and Ireland, made available under the Attribution-ShareAlike 2.0 Generic Licence. Any subsequent reuse is freely permitted under the terms of that licence.