The southernmost part of Surbiton, Southborough is Hook’s half-forgotten little sister, situated to the west of Tolworth 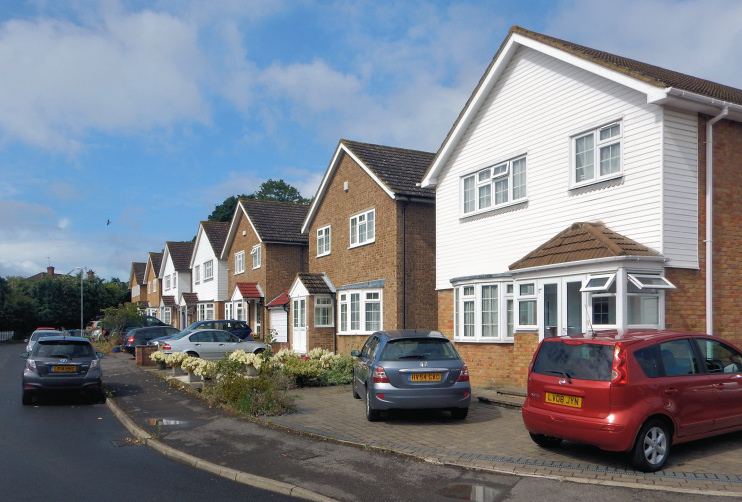 The local­i­ty’s identity derives from South­bor­ough Lodge, which in turn took its name from the same barrow that gave its name to Berry­lands. Thomas Langley built the house in 1808 on a bare part of Surbiton Common, when it was said that the only structure visible from it was Hampton Court. Soon after­wards the track that is now a section of the A243 became a turnpike road and South­bor­ough Gate was installed at the junction of the lane from Long Ditton to Ewell.

Improved roads and the sale of some building plots brought Southborough’s first popu­la­tion surge in the 1860s, with the construc­tion of several grand villas. In the 1880s the tollgate was removed and the South­bor­ough estate was broken up, with modern Tolworth taking shape on some of this land.

In 1927 the Kingston bypass crossed Hook Road and a round­about was constructed. This became the site for Southborough’s most prominent landmark, the Ace of Spades roadhouse, which incor­po­rated a garage, a mock-Tudor restau­rant built with timbers from the barn at Haycroft Farm, a swimming pool and even an airstrip. The Ace of Spades was popular with bypass users, while many locals preferred the South­bor­ough Arms, which moved to larger premises in 1934 and later became the Cap in Hand.

In the years before the Second World War South­bor­ough was fully subur­banised and most of its villas were pulled down in the process. The shops of Ace Parade and Arcade Parade were constructed on the site of Haycroft House and on land that had belonged to one of the area’s grandest homes, The Rhodrons. Having endured a protracted decline, the Ace of Spades finally closed after a fire in the mid-1950s. Its remaining features were lost when the Hook underpass was constructed in 1959–60.

Final owners Wether­spoon closed the Cap in Hand in January 2016 and it is likely to be replaced by flats.

The newspaper magnate Lord Beaverbrook was an early customer of the Ace of Spades’ repair shop in 1928 after his car collided with a lorry at the roundabout. The former world heavyweight boxing champion Max Baer set up his training camp at the Ace of Spades in preparation for two fights at Harringay Arena in 1937.

* The picture of Rickard’s Close on this page is adapted from an original photograph, copyright James Emmans, at Geograph Britain and Ireland, made available under the Attribution-ShareAlike 2.0 Generic Licence. Any subsequent reuse is freely permitted under the terms of that licence.