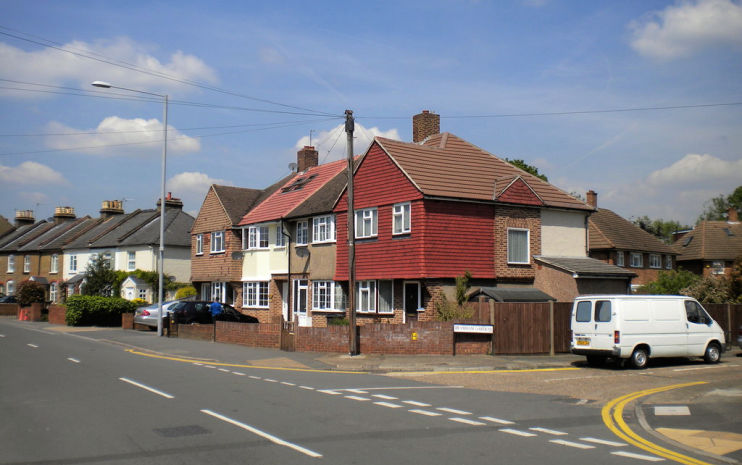 The local­i­ty’s name probably refers to a hook-shaped spur of land, although the 12th-century presence of John Hog, a mill owner later known as John del Hoc, has prompted some alter­na­tive etymo­log­ical theories. Hook was earlier called Grap­pellingham, which mutated into Grapsome.

The first cottages in Hook probably clustered near what is now the junction of Hook Road with Mansfield Road (at the bottom of the map below), when this was the southern edge of Surbiton Common and belonged to Merton Priory.

The common was to remain sparsely populated until the coming of the railway, so Hook’s small­holders and craftsmen had to travel to Kingston to sell their wares. The hamlet’s growth was constrained by the borders of neigh­bouring estates and it was many years before the popu­la­tion rose above a hundred, inhab­iting about 20 dwellings.

In the early 19th century road improve­ments, enclosure and the sale of land by Kingston council led to a modest surge in Hook’s growth as City merchants built villas here. St Paul’s church was conse­crated in 1838.

During the mid-19th century, building societies bought land here and broke it up for sale in smaller lots, often to help their share­holders qualify for the vote. Late in the century Hook became caught up in the rapid expansion of Surbiton as a railway suburb, a process that reached its apogee after the opening of the Kingston bypass in 1927. The largest project was the Hooklands estate of nearly 300 houses with attendant shops. Other roads were developed piecemeal by a variety of local builders.

After the Second World War the last fields disap­peared beneath blocks of council flats, except for some playing fields close to the bypass, while most of Hook’s remaining older villas were replaced with more compact dwellings and addi­tional rows of shops.

Opened in 1960, the Hook underpass, which cut through the South­bor­ough locality, was one of the first such projects in the country. On the eastern edge of Hook an indus­trial and commer­cial zone has grown from a nucleus of wartime factories on Cox Lane.

The children’s author Enid Blyton honed her craft while working as a nursery governess at Southernhay, 207 Hook Road, which is shown in the photograph above right. After the success of her first book she quit to take up writing full-time. The house has since been subdivided.

* The picture of houses on Clayton Road at the top of this page is adapted from an original photograph, copyright Richard Vince, at Geograph Britain and Ireland, made available under the Attribution-ShareAlike 2.0 Generic Licence. Any subsequent reuse is freely permitted under the terms of that licence.