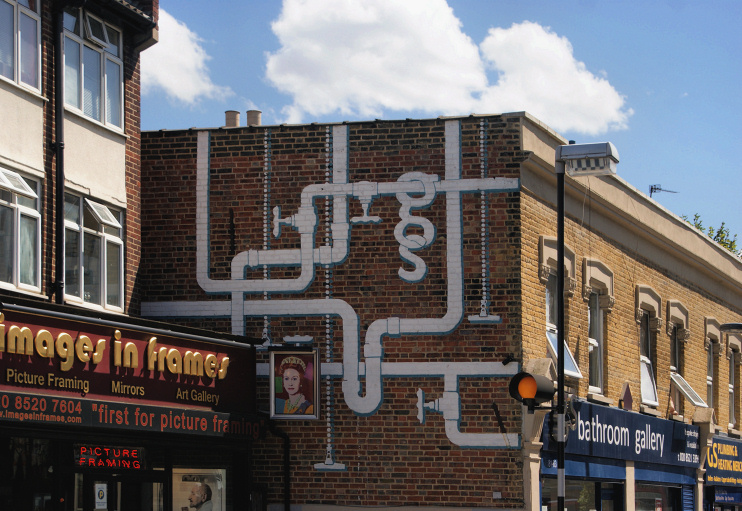 A small linear settle­ment was estab­lished here by the seventh century, one of the four that later formed the parish of Waltham­stow. At the time of Domesday Book, Wood Street’s farms were arable but they later converted to dairy produc­tion and market gardening for the London market.

From the 17th century several large houses were built on the outskirts of the hamlet. The Clock House, completed in 1706, was the home of Sir Jacob Jacobson, a pros­perous Dutch merchant.

Wood Street remained rural and a separate settle­ment until the mid-19th century, after which spec­u­la­tive builders began to lay out a series of two-storey terraced houses that soon joined it with Waltham­stow. The process received a boost from the opening of the railway station in 1873, which offered early workmen’s fares on the line into Liverpool Street.

Many residents lived in reduced circum­stances and the Wood Street Phil­an­thropic Society distrib­uted free soup during the winters of the early 20th century.

Wood Street had two film produc­tion studios; one operated from 1914 until 1932, at first making silent movies and then talkies, some with big budgets and well-known actors.

Much of the locality was rebuilt in the 1930s and several factories were estab­lished in the vicinity, one of which replaced the major film studio. Hawker Siddeley manu­fac­tured trans­formers at its Fulbourne Road site from the early 1930s until 2003. At one time Wood Street station was intended to be the terminus of the Victoria Line, but at a late stage this was switched to Hoe Street, now Waltham­stow Central.

The former Crown cinema has served as an indoor market for over 30 years. In 2012 it was radically refur­bished and now boasts around 25 little units selling clothing, antiques, collec­tables and various arts and crafts.

More recently, Wood Street and neigh­bouring roads have been beau­ti­fully enhanced by some excellent street art in a project called Wood Street Walls (as shown in the pictures on this page) and a scheme called We are Wood Street has done great work promoting the local­i­ty’s inde­pen­dent shops and cafés.

According to the 2011 census, just under half the popu­la­tion of Wood Street ward is white (down from almost two-thirds in 2001) and there is a broad spread of other ethnic groups, of whom the most numerous are of Indian, black African and black Caribbean birth or descent. Council tenants make up a rela­tively large percentage of the population.

The Wood Street Walk was an annual eight-mile run sponsored, from 1920, by the owner of a local café. It was open to anyone living within a mile-and-a-half of Wood Street and the first prize was a Christmas dinner with all the trimmings. There have been occasional attempts to revive the event since the 1950s but, as the authors of Wood Street’s history point out, the London Marathon now seems to have greater appeal.

* The view of plumbing-themed street art on the side of Bathroom Gallery on Wood Street and the view of street art on the side of The Flower Pot pub from Wood Street are slightly modified from original photographs, copyright Robert Lamb, at Geograph Britain and Ireland and made available under the Attribution-ShareAlike 2.0 Generic Licence. Any subsequent reuse of either image is freely permitted under the terms of that licence.