The oldest Jewish cultural organ­i­sa­tion in the UK, the Ben Uri arts society was founded on 1 July 1915 at a meeting held in Gradel’s kosher restau­rant, near Aldgate East tube station in Whitechapel. The man who called the meeting was the Russian-born artist Lazar Berson, a charis­matic figure whose Notting Hill studio served as the society’s first home and as a workshop and display space for budding artists.

The society aimed “to spread art among the Jewish masses” and was named in honour of Bezalel Ben Uri, the master craftsman said in Exodus to have been respon­sible for the construc­tion of the Taber­nacle and the Ark of the Covenant.

In September 1916 Lazar Berson abruptly left for America after a dispute about his political activism, and he never to returned to London. In the sudden absence of a studio the committee decided to focus on cultural activ­i­ties and on building a collec­tion of contem­po­rary Jewish art. The society’s first acqui­si­tions were around a dozen pieces by the wayward Pre-Raphaelite Simeon Solomon, followed by four works from David Bomberg.

The collec­tion was stored – and later displayed – at a succes­sion of locations in the East and West Ends. The gallery’s longest lasting base was the top floor of the West End Great synagogue in Dean Street, Soho, which it occupied from 1964 until the syna­gogue’s closure 33 years later. (The building is now the home of the Soho Theatre.)

To stave off a financial crisis in 1984 the collection’s most important painting was contro­ver­sially sold to the Tate for £150,000. The society was granted full museum status in 1995, after pledging in its revised consti­tu­tion never to allow such a sale again. When David Glasser was appointed the museum’s executive chairman in 2000 he cham­pi­oned a new policy focused on art, creativity and education without religious alignment. Ben Uri became ‘the [Jewish] art museum for everyone’ – taking a special interest in addressing issues of migration and identity.

In 2002 the Ben Uri gallery moved to Boundary Road, at the northern edge of St John’s Wood. This was supposed to be yet another interim residence, but no long-term home has yet been found – despite attempts to acquire various premises, including an unsuc­cessful bid for the Design Museum’s former warehouse in Shad Thames.

With assis­tance from the National Art Collec­tions Fund, Heritage Lottery Fund and V&A Purchase Grant Fund, the gallery continues to make new acqui­si­tions and now holds the world’s most distin­guished body of work by artists of European Jewish descent, with over 1300 pieces from 35 countries, including around 850 works by émigrés.

Many of the paintings portray the lives and expe­ri­ences of migrants, often in London – such as Amy Drucker’s depiction of an impov­er­ished family, probably newly arrived in the East End, shown on the right. While the search for a permanent display space continues, you can view the whole collec­tion online.

Meantime, the Boundary Road gallery welcomes a steady trickle of visitors to its temporary, themed exhi­bi­tions – nowadays with free admission. Space is limited on the ground floor of what is basically a converted shop, but there’s more room in the full-length basement, shown in the photo­graph below. 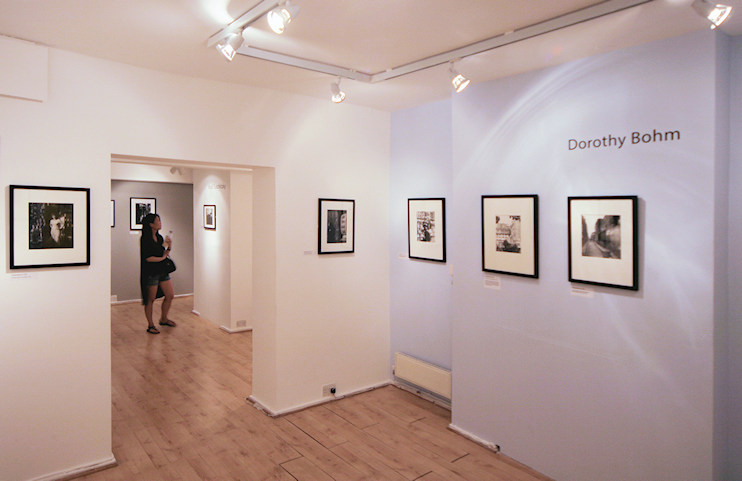