‘Not so much a dwelling place as a battlefield’

Thomas and Jane Carlyle are almost forgotten today, yet in the Victorian era they were A‑list celebri­ties in the literary world, acquainted with and admired by many writers and thinkers whose fame has outlasted their own. Ralph Waldo Emerson travelled across the Atlantic to track Thomas down when he was living in a little hideaway in Dumfriesshire and the couple’s London circle included Dickens, Tennyson, Browning, Thackeray, Ruskin and Darwin.

The son of a Scottish stone­mason, Thomas Carlyle was born in 1795. He married Jane Baillie Welsh in 1826 and eight years later they moved from Scotland to the house in Chelsea in which they spent the rest of their lives. Jane died in 1866, Thomas in 1881. The house and its contents were acquired by a memorial trust in 1895 and were given to the National Trust in 1936.

Thomas was a prolific essayist, a trans­lator of German classics and the author of several books, most notably The French Revo­lu­tion, A History (1837). As a young man, he held radical views on social issues but he became increas­ingly conser­v­a­tive (indeed posi­tively feudal) in his later years. Though he enjoyed the company of intel­lec­tuals, he seems to have disliked the rest of humanity – and he harboured a partic­ular hatred for hawkers and barrel organ grinders, from whose noise he could not escape, despite shutting himself away in the most isolated room at the top of the house.

“Are you not glad that Mr and Mrs Carlyle were married to one another and not to other people? They certainly were justly formed to meet by nature.”

Jane’s posthu­mously published letters not only confirmed her own literary talent but revealed a marriage choked by poisonous fumes – at least for her; Thomas may simply have been oblivious to his failings as a husband. As John Drinkwater put it, in The Outline of Liter­a­ture, “Carlyle was a hard man to live with. His wife was gently bred. He remained a peasant. He was a chronic dyspeptic, ill-tempered, given to grumbling and nagging … There are probably few women less to be envied than the wives of literary geniuses.”

In a lovely essay entitled ‘Great Men’s Houses’ (in which she also visits Keats House) Virginia Woolf describes Thomas and Jane’s home as “not so much a dwelling place as a battle­field …” – adding that an hour spent here “will tell us more about them than we can learn from all the biographies.”

On your arrival at the battlefield’s front door you’ll need to ring the bell, which is done by pulling rather than pushing – an authen­ti­cally olde-worlde touch. Almost every­thing in the house is genuinely original rather than a repro­duc­tion or something bought at an antiques auction – unlike, for example, in Leighton House, where all the furnish­ings are facsim­iles, albeit very well researched and crafted ones.

Chelsea in the Carlyles’ time was less fash­ion­able and consid­ered more remote than it is now, which made the house afford­able to the rela­tively impe­cu­nious couple. Though their fortunes improved, the Carlyles never attained great wealth, and could not run to domestic luxuries like piped water or adequate heating. Apart from a comfort­able drawing room, much of the house verges on the spartan – like the kitchen with its bed for the maid, shown below.

The curator and his assis­tants are tremen­dously knowl­edge­able and are happy to engage in chatty spec­u­la­tion on any aspect of the house or the lives of its occupants. They provide a perfect reminder of why it’s always best to interact with the guides in London’s less well-known visitor attrac­tions. At a major tourist desti­na­tion like Madame Tussaud’s it’s probably no use asking a member of staff for in-depth infor­ma­tion about a partic­ular exhibit: the atten­dants are mostly there to stop you from misbe­having and they may not even have a fluent command of English. But in small historic houses you’ll usually find true enthu­si­asts on hand, and conver­sa­tions with them will hugely enhance your visit. 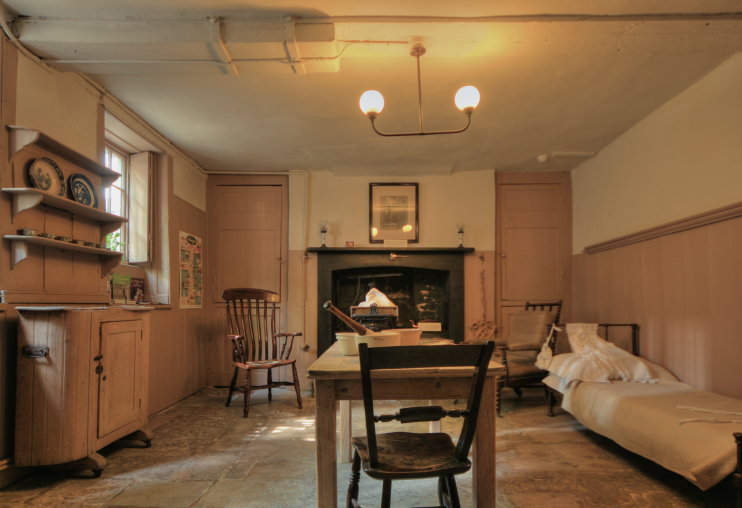