Even though it’s tucked away out of street-sight, most City workers know Lead­en­hall Market well. But occa­sional visitors to this part of London may only have glimpsed it unknow­ingly on film – doubling as Diagon Alley in Harry Potter and the Philosopher’s Stone.

The original Lead­en­hall was a lead-roofed mansion belonging to the 13th-century nobleman Hugh Neville. Subse­quently there was a granary here and a market for all kinds of food, cloth and iron­mon­gery. Dick Whit­tington was granted the leasehold on the manor of Lead­en­hall in 1408.

The mansion burned down in 1484 and an open market was estab­lished on the site, dealing mainly in fish, meat, poultry and corn. Samuel Pepys recorded that he bought a good leg of beef for sixpence in 1663, three years before much of the market was destroyed in the Great Fire of London.

After the fire, the market continued to operate from a variety of buildings, and became espe­cially noted for game and poultry.

Leadenhall’s most famous fowl was Old Tom, a gander that evaded slaughter here, became a market favourite and was fed at local pubs. Tom allegedly survived to the age of 38 and on his death in 1835 he lay in state at the market and was buried here.

Such was Leadenhall’s fame that it gave rise to several once-familiar terms. A ‘Lead­en­hall blade’ was one that would not cut. A ‘Lead­en­hall Market sportsman’ was a landowner who sold his game to the poul­terers here. A ‘Lead­en­haller’ was an alter­na­tive name for a ‘bagman’, who sold live foxes in bags. They were regularly traded at the market from the late 18th until the mid-19th century, brought in (mainly from France) to overcome the scarcity created by the destruc­tion of the animals by game­keepers and farmers. The fox was released from the bag at the time of the hunt.

The Corpo­ra­tion of London commis­sioned Lead­en­hall’s present wrought-iron and glass-roofed buildings, which were completed in 1881 to the design of Sir Horace Jones, who was also respon­sible for the Victorian market halls at Smith­field and Billings­gate. The buildings were restored on their centenary, bringing the luscious internal colour scheme back to life.

Today, Lead­en­hall Market has been colonised by fashion and accessory retailers, coffee shops and restau­rants, though – pleas­ingly – there’s still a butcher. There are market stalls, too, on weekdays, mostly selling food, jewellery and art. Lead­en­hall’s Central Avenue can be hired for events or sit-down dinners. 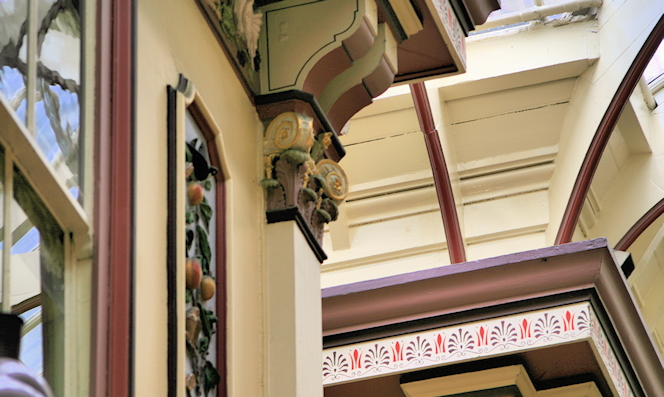