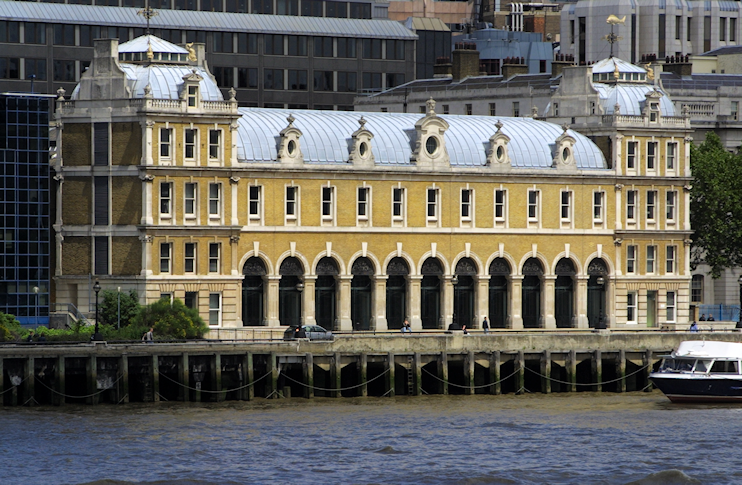 Billings­gate probably began as a Roman watergate on the Thames and it was used by the Saxons as a small port for general cargo.

Its name simply meant ‘gate of a man called Billing’ but it is said in legend to have been named in honour of Belin or Belinus, a mythical British king who ruled in the early 4th century bc, when he rebuilt the City of London, founded the Tower of London and built Ermine Street and Watling Street. Geoffrey of Monmouth’s Historia Regum Britan­niae (History of the Kings of Britain, c.1136) is the primary source of the legend of Belin.

Until the late 15th century most of London’s fish was landed upstream at Queen­hithe, after which it began to decline as a result of its inac­ces­si­bility to larger vessels and it was super­seded by Billingsgate.

The Boss of Billings­gate was some sort of post, probably a drinking fountain, that stood outside the fish market. One source suggests that the boss bore an image of Belin, another that it was shaped like a pot-bellied man. It was a tradition that fish porters would ask passers-by to kiss the boss and, if they refused, they were bumped against it. It was the subject of a comic ballad, entitled ‘The Marriage of London Stone and the Boss of Billings­gate’ (1521), and a play by John Day and others (1603), which has not survived.

Billingsgate’s status was offi­cially recog­nised by an act of parlia­ment of 1699, which estab­lished ‘a free and open market for all sorts of fish what­so­ever.’ Sales were made in wooden sheds until the construc­tion in 1850 of the first trading hall, which was replaced by a larger structure in 1877. That building survives today and is shown in the photo above and in the centre of the satellite image below (or off to the right if you’re viewing on a narrow screen).

With the widening of Lower Thames Street in the late 1960s trading at Billings­gate became increas­ingly imprac­tical and the market trans­ferred to a renovated warehouse at the West India Docks in 1982. (Click here for a Bing bird’s eye view of present-day Billings­gate market.)

Each year since the move the lord mayor of London has presented the nominal rent to the mayor of Tower Hamlets in the form of a gift of fish, which is then distrib­uted to old people’s homes in the borough.

In December 2018 the City of London Corpo­ra­tion announced its acqui­si­tion of the 42-acre Barking Reach power station site as a potential new home for its three wholesale food markets: Billings­gate, Smith­field and New Spitalfields.

The old market caught the attention of many artists, attracted by the oppor­tu­nity to present life in the raw. Shown on the left, William Hogarth’s exuberant Shrimp Girl (c.1750) hangs in the National Gallery.

The swearing of workers in the market made Billings­gate – and its fishwives – synony­mous with coarse language. Uncon­nect­edly, a ‘Billings­gate pheasant’ was a red herring or a bloater.