A focus for local pride

The London Borough of Redbridge was formed in 1965, primarily as a merger of the municipal boroughs of Ilford in the south-east and Wanstead & Woodford in the north-west. The two former Essex boroughs had histor­i­cally been separated by the River Roding and the new London borough was emblem­at­i­cally named after a red-brick bridge that was built across the river in 1642.

Redbridge Museum opened in 2000 with financial support from the council and the Heritage Lottery Fund. The museum is located on the spacious second floor of the Central Library in Ilford.

Like many parts of modern London, Redbridge’s demo­graphic profile has been changing rapidly in recent years, with many newcomers arriving, so one of the museum’s aims is to introduce newer residents to some of the more signif­i­cant aspects of their borough’s history. The route through museum starts with the present day (focussing on the borough’s newer commu­ni­ties) and works back through time.

The first section is called ‘Moving Stories’ (1940 to the present). Like the other sections, exhibits here don’t attempt to provide a complete history of the borough, but instead pick some of the most distinc­tive episodes. Each display case high­lights a single indi­vidual — who might be a famous former resident like Wood­ford’s Sylvia Pankhurst or an ordinary person with a char­ac­ter­istic story, like a wartime evacuee or a worker at Ilford Limited (both shown in photographs below).

The section called ‘The March of Bricks and Mortar’ (1900 to 1939) includes the re-created Edwardian front room of a house on Ilford’s Cranbrook estate. Specif­i­cally, the parlour is imagined to belong to George Tasker, a civil servant who wrote a defin­i­tive history of Ilford and its environs in 1901. As the photo above right shows, there’s a lamp­lighter’s cart in front of Mr Tasker’s house. This was used (quite inno­v­a­tively) by Ilford borough council to repair gas or electric street lamps in the early years of the 20th century.

Another exhibit repro­duces the kitchen of a house built in Woodford Green in the early 1930s, part of which is shown bottom-left in the group of images below. Like many of the exhibits, the scene has been put together with the help of local people who have shared their memories of that time. Some of them have contributed audio descrip­tions that you can listen to on a handset.

One of the quaintest and quirkiest exhibits is a scene from the Woodford cycle meets that began in 1933, in which partic­i­pants added hazardously ornate floral deco­ra­tions to their bicycles, as shown in the central photo below.

‘All Sky and Turnips’ looks at the primarily rural, agri­cul­tural existence of 19th-century residents, including the famous fair at Fairlop – complete with a specially recorded rendition of the ‘Fairlop Fair Song’. There’s also a re-creation of part of a classroom at Dr Barnardo’s pioneering village home for girls at Mossford Green in Barkingside.

The whole thing is done very profes­sion­ally and creatively. Many of the displays don’t look at all like conven­tional museum cabinets. Theatrical set designers were involved in the project – and it shows, even in the variety of flooring, which includes flag­stones, decking, tiles, floor­boards and aluminium tread plate.

Redbridge Museum is hoping to gain some more funding in the near future to make a few improve­ments. That would be good – but Hidden London’s main hope is simply that the insti­tu­tion continues to thrive through these austere times. 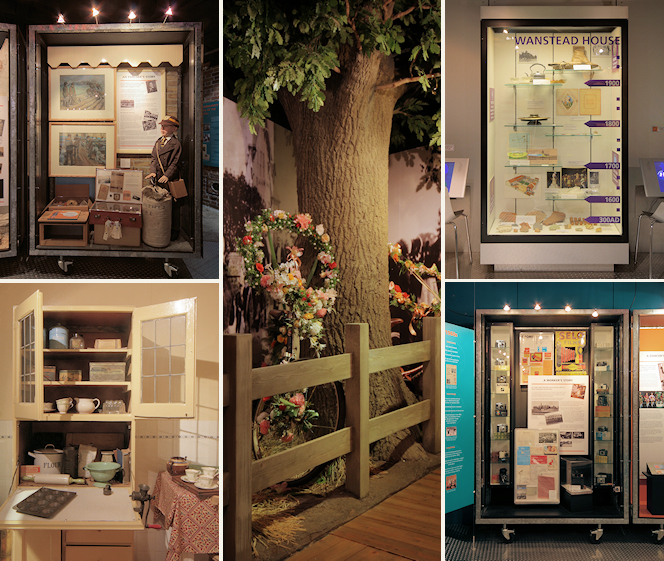