A mixed-use locality situated among channels of the River Lea, south-east of Stratford High Street, dominated by old and new sewage pumping stations 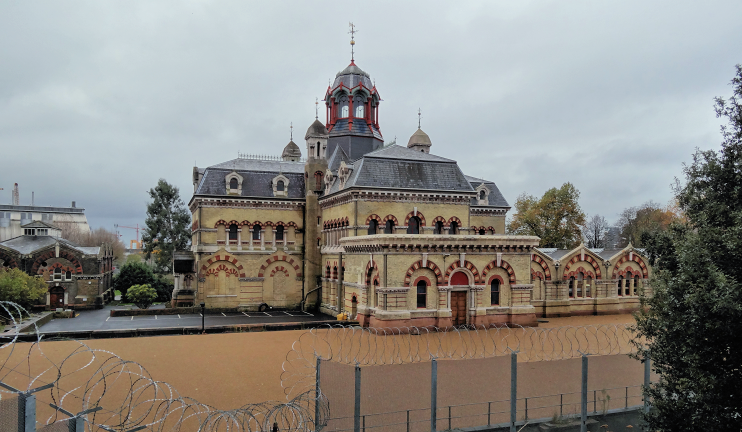 Abbey Mills takes its name from water­mills belonging to Stratford Langth­orne Abbey, a Cister­cian monastery founded in 1134 by William de Mont­fichet. The abbey stood in the marshes beside the present-day Chan­nelsea River and was endowed with estates in West Ham. The first record of a mill here was in the early 14th century. The abbey remained a wealthy and influ­en­tial landowner until the disso­lu­tion of the monas­teries in the 1530s.

Abbey Mills pumping station is a much-admired master­piece of Victorian public works engi­neering, built in 1865–8 and nicknamed ‘the cathedral of sewage’. Designed by Joseph Bazal­gette, the station’s pumps drew waste water from the drains of north London and sent it down to the filter-beds at Beckton. Land­scaping work has recently enhanced the view from the nearby Greenway footpath, as shown in the photo­graph above.*

Group tours of Bazal­get­te’s pumping station may be booked in advance with Thames Water, as may indi­vidual visits on Open House weekend. Thames Water receives more requests to see inside Abbey Mills than any other property in its portfolio. The pumping station cele­brated its 150th anniver­sary on 22 May 2018, when a plaque was unveiled to commem­o­rate the newly restored pump house interior, which has been repainted in its original colours.

Sewage is nowadays pumped at a new building, a zinc-coated temple located south of the cathedral on what was formerly a marshy exclave of the Lee Valley Park. Its workload will increase signif­i­cantly in 2021 when it begins to transfer flows from the newly built Thames Tideway Tunnel. (The satellite view below gives a good idea of land use in the Abbey Mills area. The old pumping station is at its centre.)

In the past couple of decades most regen­er­a­tion projects in the vicinity of Abbey Mills have consisted of little more than erecting shed-​​type ware­houses in place of disused factories. However, given the buoyant state of the London property market, future schemes may be much more ambitious. Devel­op­ment oppor­tu­ni­ties could include the former site of a chemical works beside the Chan­nelsea River’s Abbey Creek, which was acquired in 1996 by an Islamic trust. A series of objec­tions has stymied planning proposals for the construc­tion here of a so-called mega-mosque, and some or all of the site may ulti­mately be used for another purpose.

The locality is served by Abbey Road station, which opened in 2011 on the Stratford Inter­na­tional extension of the DLR. The station might have been better named ‘Abbey Mills’, if only to prevent Beatles fans coming here by mistake.

The Gothic interior of the original Abbey Mills pumping station has appeared in several TV shows and movies, including doubling as the Arkham asylum laboratory in the 2005 film Batman Begins.

The picture of Abbey Mills Pumping Station on this page is adapted from an original photograph, copyright Ian Wright, at Flickr, made available under the Attribution-NonCommercial 2.0 Generic licence. Any subsequent reuse is freely permitted under the terms of that licence.