A (relatively) poor man’s Hampstead, situated to its south-east 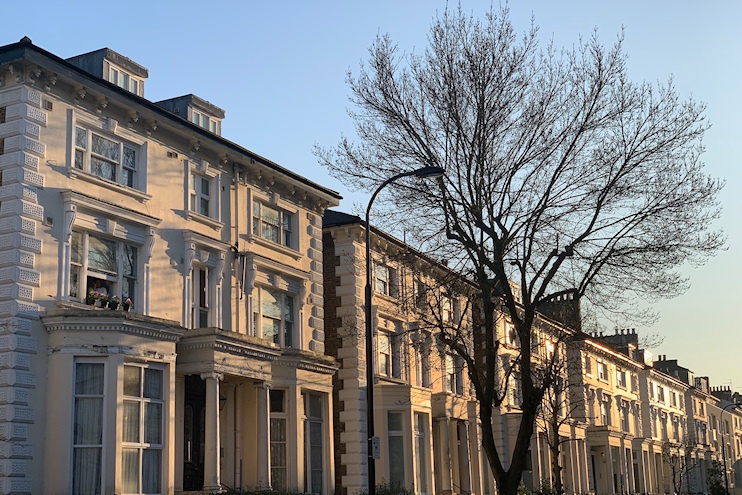 The sub-manor of Belsize was first recorded in the early 14th century and Belsize House in 1496. The name derives from Bel-assis, meaning ‘beau­ti­fully situated’.

Well-to-do Londoners built country houses in Belsize in the 17th century, each with its own spacious grounds. Among these was a rebuilt Belsize House, where a sub-lessee who called himself ‘the Welsh ambas­sador’ opened pleasure gardens in 1720. These briefly attracted high-class visitors, including the Prince and Princess of Wales, but like almost all London pleasure gardens they soon descended into bawdiness and vulgarity, offering enter­tain­ments such as mud-wrestling and illegal gaming. The gardens were closed in 1740.

Belsize was divided into nine leasehold estates in 1808, each based on a single house and its parkland. Early exploita­tion of the leases was limited to the construc­tion of a handful of lodges and villas, while a new and excep­tion­ally grand Belsize House appeared. Terraces of houses were built north of England’s Lane in the mid-1820s but the main phase of subur­ban­i­sa­tion came after 1850. One by one the country houses were demol­ished and their grounds covered with detached or semi-detached houses.

Each devel­op­ment was given the name of the house it replaced, such as the Rosslyn Grove estate and the Hillfield estate, but the largest was the Belsize Park estate on the site of Belsize House, which ulti­mately gave its name to the entire suburb. Sussex builder Daniel Tidey was respon­sible for the first stage of Belsize Park’s devel­op­ment, putting up five-storeyed stuccoed houses, but he over-extended himself and went bankrupt in 1869. William Willett and his son, also William, led the next phase, prefer­ring a variety of red-brick designs. Separate ‘village centres’ evolved on England’s Lane and Haver­stock Hill and at Belsize Village.

In the 1930s refugees from central Europe opened a synagogue, a Viennese theatre club and conti­nental-style cafés. Flat-building reached a crescendo around this time, when many Victorian prop­er­ties were replaced. The most impres­sive of the blocks was the Isokon building on Lawn Road, by the modernist architect Wells Coates. Shown in the Modern House’s photo below, the grade I listed Lawn Road Flats were restored in 2004. 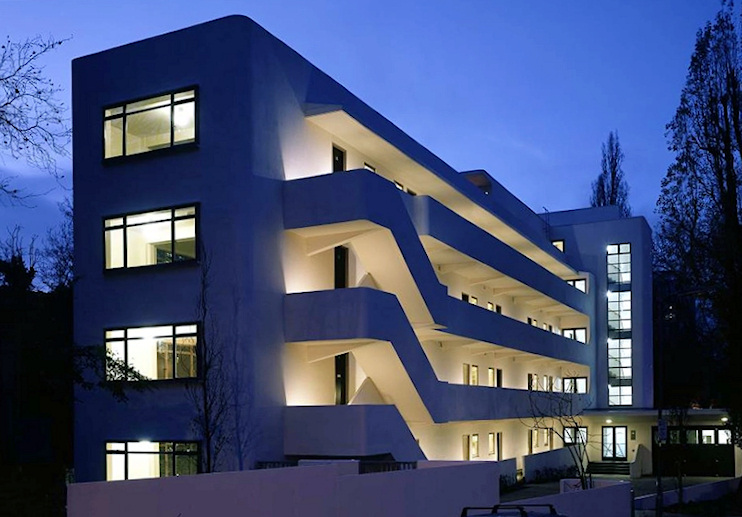 Throughout its existence Belsize Park has acted as a more afford­able alter­na­tive to Hampstead but the price distinc­tion is less and less apparent nowadays. Most residents rent or own flats in subdi­vided houses rather than occupying the whole property, although gentri­fi­ca­tion since the 1970s has resulted in the reuni­fi­ca­tion of a number of homes – for which prices in the millions are the norm.

Such is Belsize Park’s contem­po­rary cachet that estate agents have invented ‘Lower Belsize Park’ as the new identity for the area that had been called Maitland Park for the previous 150 years. For a while, Google Maps went along with this charade.

Belsize Park has always attracted artists, writers and entertainers. The artist Robert Bevan lived locally and painted several views of the neighbourhood, including A Street Scene in Belsize Park (1917), which shows the influence of his acquaintance Paul Gauguin.

* The picture entitled Lucent Belsize Park at the top of this page is resized from an original photograph at Flickr, copyright Marc Barrot, made available under the Attribution-NonCommercial-NoDerivs 2.0 Generic licence. Any subsequent reuse is freely permitted under the terms of that licence.