A former artists’ retreat and ‘metropolitan suburb’, now a section of the A502 linking Chalk Farm with Belsize Park 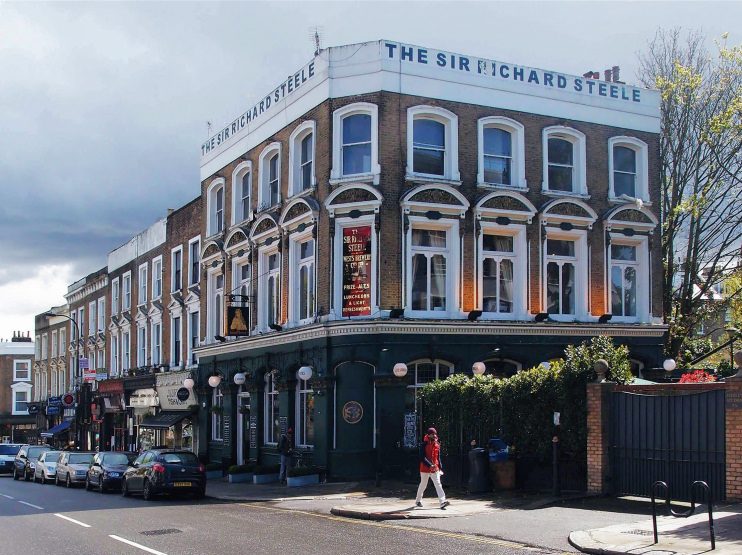 First recorded in 1741, Haver­stock Hill’s name is of uncertain origin. David Mills, in his Dictio­nary of London Place Names, spec­u­lates that it may be connected with a landowning family from Stock, near Chelms­ford in Essex, which was called Haver­stocke in the 17th century. Another sugges­tion is that the name referred to a place where oats were grown, but it is not clear (at least to Hidden London) how any variation on the word ‘Haver­stock’ could have connoted oat culti­va­tion. Either way, the name orig­i­nally applied to the whole slope (and later to a hamlet on that slope) rather than the road, which was earlier simply called the Hampstead Road or the London Road.

Until the mid-19th century the hamlet of Haver­stock Hill consisted of just the Load of Hay tavern (rebuilt in Ital­ianate style in 1863 and now the Haver­stock Tavern) and a few cottages lying below the corner of England’s Lane. An early resident was the writer Richard Steele, co-founder of both Tatler and The Spectator.

In 1847 the Orphan Working School moved from City Road to a 13-acre site that was named Maitland Park in honour of Ebenezer Maitland, the school’s late president. It was located on the west side of the newly built road named Maitland Park Villas. Later called the Royal Alexandra School, the insti­tu­tion relocated to Reigate, Surrey, after the Second World War.

The Anglican parish church of St Andrew, Haver­stock Hill, was built in 1864–6 on Malden Road, which is now consid­ered part of Kentish Town. The church was wrecked in the Blitz and demol­ished in 1955.

St Dominic’s Priory was built on Southampton Road in 1863–8 and its church was completed in 1883. The archi­tects were Gilbert Blount and Charles Alban Buckler. From the outset, the priory complex included a school, which has evolved into the present St Dominic’s Catholic primary school.

Haver­stock Hill railway station opened on the Midland Railway’s line into St Pancras in 1868. The station was located on the west side of Lismore Circus in Gospel Oak – at the top right corner of the map below. It was closed on New Year’s Day 1916 as a wartime economy measure – and never reopened.

The estab­lish­ment of schools, churches, almshouses and other insti­tu­tions on the hillside briefly made Haver­stock Hill a more signif­i­cant place (not just a road) than anywhere else between Camden Town and Hampstead. John Marius Wilson’s Imperial Gazetteer of England and Wales called it “a metro­pol­itan suburb … [that] has undergone much recent extension” in 1872. In that same year, artists’ studios replaced the hamlet’s original cottages. 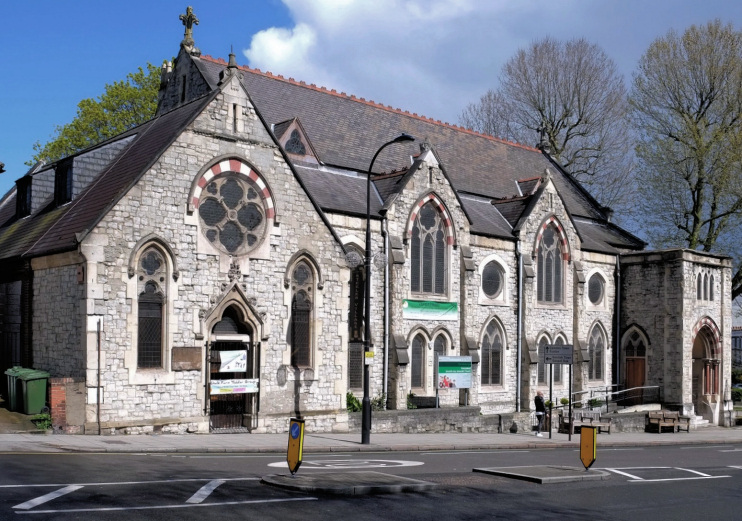 In 1877 the Oxendon Pres­by­terian church relocated from Oxendon Street in the West End to a new building on Haver­stock Hill, designed by Thomas Arnold. Shown in the photo above,* the church was sold in 1970 to the Hampstead Seventh-Day Adven­tists.

The various estates bordering Haver­stock Hill were sold off for devel­op­ment in the latter part of the 19th century. A vestry hall built in 1878 was later extended to become Hampstead town hall.

Belsize Park tube station opened in 1907, on what was then the Charing Cross, Euston & Hampstead Railway.

Phases of infilling and rebuilding have since wrought signif­i­cant changes, notably in the 1930s and 1970s. The upper section of Haver­stock Hill has become Belsize Park’s high street, where “the wide pavements with trees and benches and space for café tables give this area a distinc­tive conti­nental character,” according to Camden council. The amenities here include the Everyman cinema (formerly the Screen on the Hill) and Wac Arts’ courses and community-based projects at the old town hall.

In recent years there have been attempts to foist the name ‘Steele’s Village’ (with or without an apos­trophe) on the pleasant vicinity of Haver­stock Hill’s junctions with England’s Lane and Steele’s Road. This is precisely the site of the original hamlet of Haver­stock Hill and the merits of this rebranding are not obvious to Hidden London.

In May 2016 a judge ruled that the whole of the Sir Richard Steele – a Victorian pub located just across the road from the Haver­stock Tavern and shown in the photo at the top of this article – is an asset of community value and as such should be protected from redevelopment.

George Clausen’s Spring Morning, Haverstock Hill (1881) is considered a definitive image of Victorian Britain. The painting, which hangs in Bury art museum, is especially notable for its portrayal of the contrasting economic circumstances of its subjects.

Postal district: NW3 (and NW5 in the east of the wider area)
Population: 13,354 (Haverstock ward (includes most of Chalk Farm and the west side of Kentish Town), mid-2014 estimate)
Station: Northern Line (Belsize Park, zone 2)

* The pictures of the Sir Richard Steele public house, and the Seventh-Day Adventist Church, Haverstock Hill, on this page are adapted from original photographs, copyright Julian Osley, at Geograph Britain and Ireland, made available under the Attribution-ShareAlike 2.0 Generic Licence. Any subsequent reuse is hereby freely permitted under the terms of that licence.