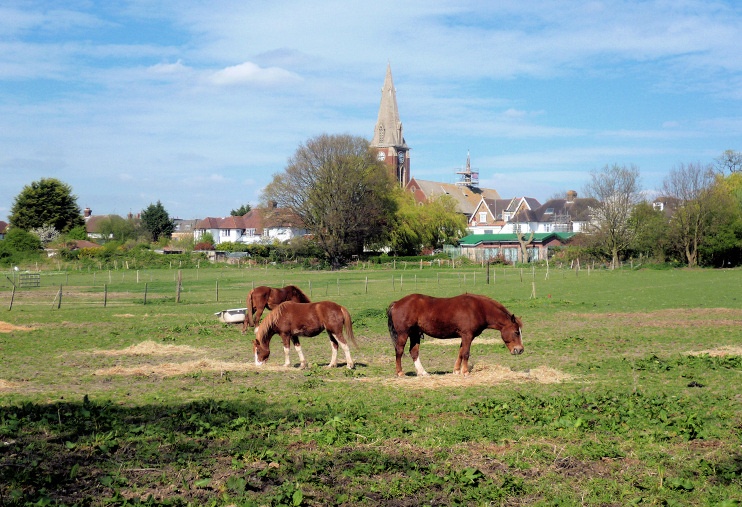 A hamlet was in existence at Bromley Common by the 16th century. The diarist John Evelyn was robbed on the common in 1652, when his assailants jumped out from behind a large oak tree.

Enclosure of the common’s 300 acres began in 1764 and the Pye House, later the Crown public house (now a Toby Carvery), opened in the following year. The Rookery and Oakley House were the most substan­tial mansions built on the edge of the common in the 18th century. The latter became the home of Captain (and after­wards Admiral) Sir William Corn­wallis.

Following the second stage of the common’s enclosure in 1821 villas were built on Hastings Road, with a row of cottages on what is now Oakley Road. The village had expanded signif­i­cantly by the late 1830s and two of the cottages were converted into an infants’ school, while Holy Trinity church (shown in the photo below) was built in an econom­ical style known as Commis­sioners’ Gothic. A purpose-built school opened beside the church in 1847. 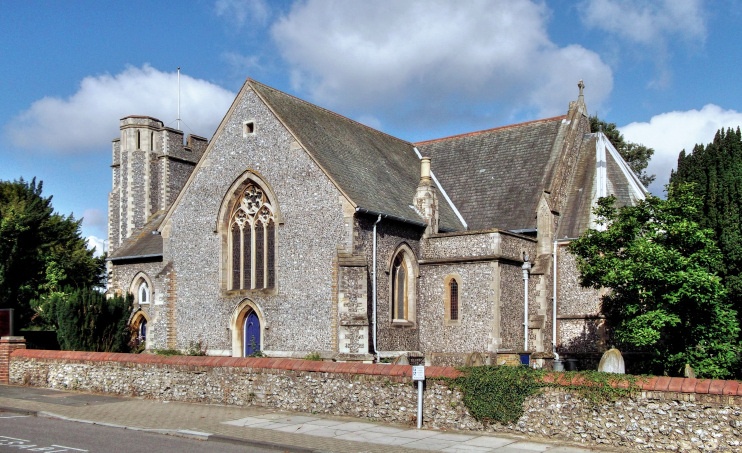 To the north, the area around Chat­terton Road was nicknamed ‘the building field’ in the 1870s, when it rapidly filled with terraced cottages, accom­pa­nied by shops and a large public house, now the Chat­terton Arms. The 1880s saw the opening of a hospital for infec­tious diseases, the improve­ment of Holy Trinity and the building of St Luke’s church (visible in the photo­graph at the top of the page*), although its tower was not completed until 1910.

A bus garage opened in 1924 and another phase of expansion later in the decade neces­si­tated more school building. To the west, the Norman family preserved the grounds of the Rookery until the army took over the house during the Second World War.

The Rookery burned down in 1946 while still under military occu­pa­tion, after which green-belt legis­la­tion prevented devel­op­ment and ensured that much of this area has remained open space. Bromley technical college was built on the Rookery’s site in 1965 and this has since become the largest of the London South East Colleges’ campuses. The isolation hospital, later a geriatric care facility, was demol­ished and replaced by housing in the mid-1980s. Oakley House has become a Masonic hall that also serves as a confer­ence, banqueting and wedding venue.

Across the road from the college, Asprey Homes and Barratt subsidiary Ward Homes laid out Trinity Village from 2010. The devel­op­ment replaced a company sports ground and was vainly opposed by Bromley council.

Cricket has been played on the common since at least 1735. From its formation in 1889 to the present day, Bromley Common cricket club has been based at the Grove, off Oakley Road.

Richmal Crompton, author of the Just William books, lived with her mother at 9 Cherry Orchard Road from 1917 to 1928. She wrote the first nine books in the series here and later moved to the Glebe, Oakley Road.

* The picture of horses at Bromley Common at the top of this page is adapted from an original photograph, copyright Marathon, and the picture of Holy Trinity church is adapted from an original photograph, copyright David Anstiss, both at Geograph Britain and Ireland, made available under the Attribution-ShareAlike 2.0 Generic Licence. Any subsequent reuse of the images is freely permitted under the terms of that licence.