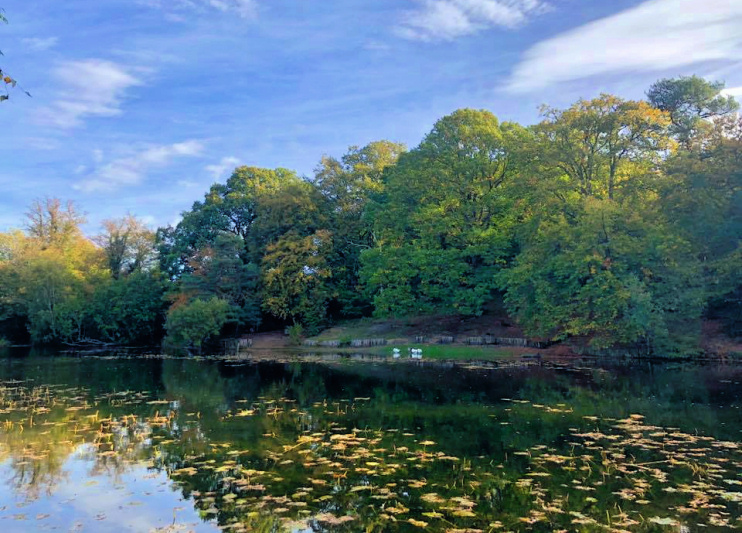 It has been claimed that Keston’s name relates to Julius Caesar’s supposed presence in the area in 55bc. This is extremely implau­sible, although it is likely that Romans settled here around ad200 and relics of a Roman cemetery have been found. However, the place name probably derives from Old English – ‘boundary stone [stān] of a man called Cyssi’ (no relation to Caesar).

The first reference to the place’s existence appeared in an Anglo-Saxon charter of 862, making this one of the earliest recorded geograph­ical names in the London area. It was spelt Chestan in 1086 (Domesday Book) and Kestan in 1205.

The ancient parish church, opposite the western end of Downe Road, was the centre of medieval Keston but after the Great Plague devel­op­ment began anew a mile and a half to the north, in a clearing between Hayes Common and Keston Common. The latter was one of the first pieces of common land to be protected by Act of Parlia­ment from further encroach­ment (in 1865) and now has perhaps the most diverse range of habitats of any common in London, with the greatest number of rare species.

Most of the 20th-century construc­tion is hidden from the main roads, including the 140-acre ‘gated community’ of Keston Park, which was begun in 1923 and continues to evolve, ever more expen­sively. The conceal­ment allows Keston to maintain the impres­sion – by London standards – of an unspoilt rural community.

However, the village has rela­tively few houses of any serious antiquity or archi­tec­tural merit. Keston Court, Leafy Grove House and numbers 1, 2, 31, 32 and 33 Common­side are the only grade II listed homes. The smaller village of Leaves Green, to the south of Keston, has more listed prop­er­ties than this.

The surrounding farmland is littered with evidence of Neolithic as well as Roman occu­pa­tion, and there is a grade I‑listed, weather-boarded windmill dated 1716, and restored in 1913 – but most of these sites are inac­ces­sible to the public.

Shown in the photo­graph at the top of this article, Keston Ponds, near the private estate of Holwood, are fed from the fanci­fully named Caesar’s Well, the source of the River Ravensbourne.

Ravens­bourne House, a locally listed Victorian mansion that had been serving as a business centre, was converted into seven apart­ments in 2017–18. The conver­sion is shown in the devel­op­er’s CGI above. Two pairs of houses were also built in the grounds. The scheme boasts “a secure Club Room” that seems to consist of little more than a boot room and dog wash facility – but these could be useful with Keston Common and the ponds close by.

* The picture of Keston Ponds at the top of this page is copyright Joanne Blakemore and used with her kind permission.