A socially diverse community straddling the Finchley Road south of Golders Green, with Jewish, Arabic and Somali groups among its minorities 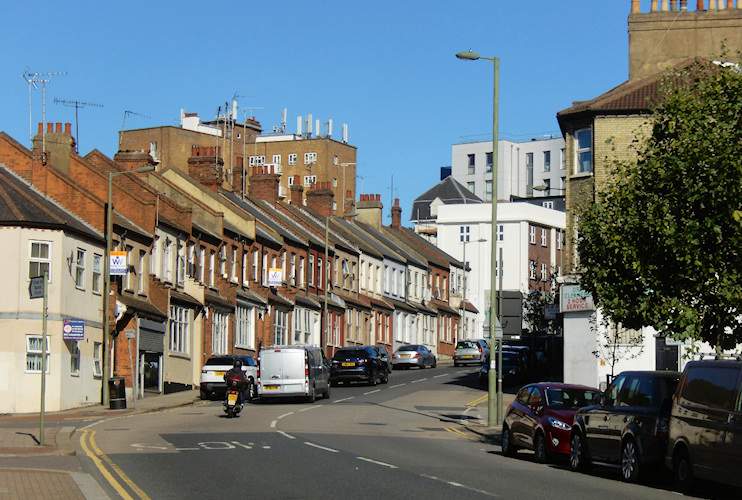 Child’s Hill’s name probably refers to a former resident – possibly Richard Child, who was living around here in 1321. Histor­i­cally, the ownership of Child’s Hill was disputed by the manors of Hendon and Hampstead, with the former even­tu­ally winning.

This was one of the Hendon area’s first indus­trial districts, with brick and tile making in the early 19th century and hand-laun­dering that served the gentry of Hampstead. One laundry was used as a chapel until the conse­cra­tion of All Saints church in 1856.

The arrival of the Finchley Road spurred further growth from the late 1820s, when a tollgate was set up near the Castle Inn. An indi­ca­tion of the early signif­i­cance of Child’s Hill is that this was the name given to what is now Crick­le­wood station when it opened in 1870.

Shown in the photo­graph below,* Child’s Hill Park was laid out on land that was gifted for this purpose by the Eccle­si­as­tical Commis­sioners in 1891.

Child’s Hill became one of the poorest parts of Hendon urban district. Its housing was described by one coun­cillor in 1903 as a “disgrace to civilisation.”

A tram link with Crick­le­wood opened in 1909 and in 1914 the council chose Child’s Hill for its first housing estate, consisting of 50 dwellings. Semi-detached houses were added around Child’s Hill Park in the 1930s. During the early 1960s the council used its powers to move industry out of Granville Road and into new accom­mo­da­tion beside the North Circular Road.

The district’s priciest homes tend to lie in the south of the locality, off Hendon Way, notably on the exclusive Hocroft estate.

NB The apostrophe is omitted from Child’s Hill’s name more often than not nowadays. But Hidden London is reluctant to let go of it.