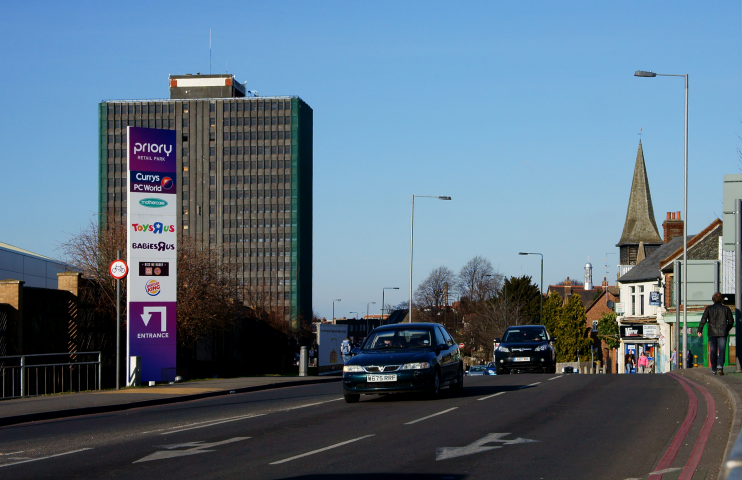 Colliers Wood was first recorded in 1632 and the name refers to charcoal-burners not miners (as is also the case with Collier Row, across the other side of London).

From 1755 a tollgate stood on the Merton Road (now High Street Colliers Wood) on the site of the present station, which gave rise to the alter­na­tive village name of Single­gate. Colliers Wood House, which had been home to Eliz­a­bethan and later notables, was rebuilt around 1780.

By the early 19th century mills beside the River Wandle were switching from grinding corn to printing textiles, an industry that soon employed the bulk of the local labour force. In 1851 only a twentieth of the popu­la­tion worked in agri­cul­ture, a remark­ably low propor­tion for such an out-of-the-way place.

In the 1870s the 40-acre grounds of Colliers Wood House began to succumb to spec­u­la­tive building, at first in the direction of Tooting, then towards Merton. The tollgate was taken down and the first shops, a school and Christ Church were built. Colliers Wood House was demol­ished in 1904; its site is now occupied by the low numbers of Clive Road and Warren Road.

A tram service began in 1907 and streets of terraced houses were laid out on land belonging to Emmanuel College, Cambridge.

Builders squeezed in a last few pebble-dashed and mock-Tudor prop­er­ties after the Northern line (as it is now called) was extended here in 1926. The station was designed by Charles Holden, whose name now adorns the pub opposite.

Subse­quent additions included council flats, a 19-storey office tower and a Sava­centre that was said to be the largest hyper­market in Europe and has since been divided into a Sains­bury’s and a Marks and Spencer (located near the bottom left corner of the map below).

After standing empty for several years, the widely derided tower is likely to be given a facelift and converted to resi­den­tial use, possibly accom­pa­nied by a new, slightly shorter block next door.

At the 2011 census 38 per cent of Colliers Wood’s residents were white British and 18 per cent were of South Asian heritage. A rela­tively high propor­tion of residents are in their twenties and living in privately rented accommodation.

* The picture of Christchurch Road is adapted from an original photograph, copyright Peter Trimming, at Geograph Britain and Ireland, made available under the Attribution-ShareAlike 2.0 Generic Licence. The picture of Colliers Wood station is adapted from an original photograph, copyright Sunil Prasannan, at Wikimedia Commons, made available under the Attribution-Share Alike 3.0 Unported licence. Any subsequent reuse of either image is freely permitted under the terms of those licences.