A street and locality in south Camberwell, connecting with Herne Hill at its southern end 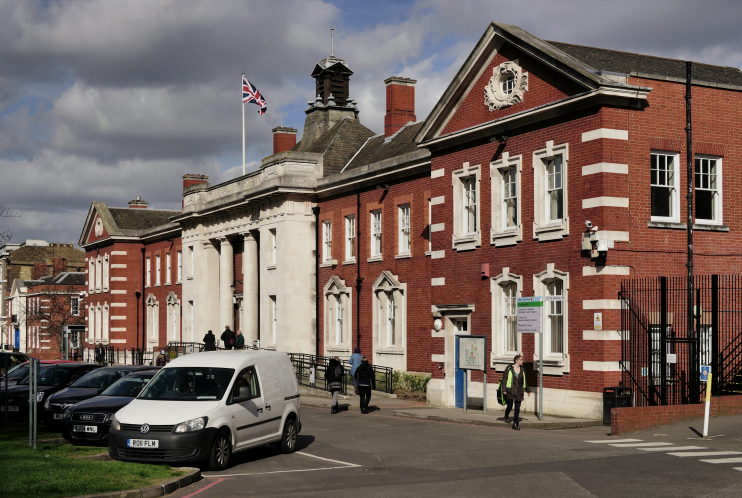 Limited suburban devel­op­ment began in the 1780s on land belonging to the de Crespigny family, French Huguenots who had settled here a century earlier. Their seat, Champion Lodge, was demol­ished in 1841 to make way for more housing. In the following year the writer John Ruskin moved into a detached house on the hill and stayed here for almost three decades.

St Matthew’s church was built in 1846 on the site of a propri­etary (private) chapel. The church did not survive the Blitz.

Even after the arrival of the railway in December 1865, the emphasis remained on building substan­tial villas, rather than the high-density terraced houses that had consumed other parts of Camber­well. At the southern end, this restraint was the policy of the governors of the Dulwich College estate.

Denmark Hill school (now Lyndhurst primary school) opened on Grove Lane in 1905 and Ruskin Park was created two years later. To form the park, eight of the original houses facing Denmark Hill were demol­ished, including one in which Felix Mendelssohn had stayed, and where he wrote his ‘Spring Song’.

In 1913 King’s College hospital relocated to what had been the workhouse of the parish of St Clement Danes and estab­lished a separate school of medicine here. The school acquired a house on Champion Hill as a students’ hall of residence. Shown in the photo above,* the Maudsley hospital opened in 1915 as a military hospital and then in 1923 as a London County Council hospital for the early treatment of acute mental illness. Both hospitals are now branches of King’s Health Partners.

Marked with a big pink pin on the map below and shown in the small photo,* the Salvation Army’s William Booth College was built in 1932 by Sir Giles Gilbert Scott. Its monu­mental style is remi­nis­cent of Scott’s Bankside power station, now Tate Modern.

Council housing now occupies much of the hinter­land but many older prop­er­ties survive on the main road, including some detached houses from the early 19th century.

The locality’s main ethnic groups are of British, Caribbean and African descent.

The first recorded game of roller hockey, a sport now especially popular in the USA and southern Europe, was played at the Lava roller skating rink on Grove Lane in 1885. The rink acquired its name because it was floored with a layer of lava from Mount Vesuvius. The building was converted to a military depot in 1914 and burned down around 1920.

Alan Bennett’s play Denmark Hill was written (but never made) for film or television in the early 1990s. This “modern day take on Hamlet” [the Prince of Denmark Hill] eventually appeared as a radio drama in 2014.

* The picture of the Maudsley Hospital at the top of this page is modified from an original photograph, copyright Peter Trimming, at Geograph Britain and Ireland, made available under the Attribution-ShareAlike 2.0 Generic Licence. The picture of William Booth College is adapted from an original photograph by ‘Dbiv’ at Wikimedia Commons, made available under the Attribution-ShareAlike 3.0 Unported licence. Any subsequent reuse is hereby freely permitted under the terms of those licences.