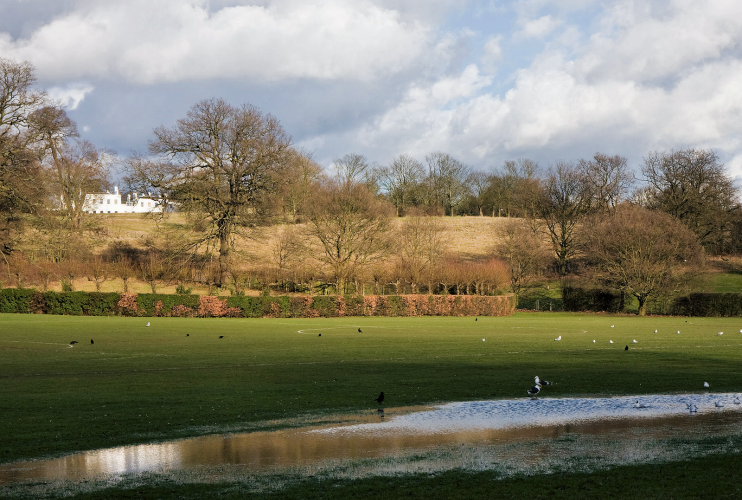 A medieval village grew up around what is now the junction of East Barnet Road, Cat Hill and Church Hill Road. Cat Hill’s name probably derives (via the Cat public house) from Katbrygge, a medieval cattle bridge that crossed the Pymmes Brook. St Mary’s church is of 12th century origin at the latest and, although much-altered, it is still recog­nis­ably Norman. St Mary’s was the mother church of Barnet and the entire modern district can be said to have evolved out of East Barnet.

A mill was recorded in 1291, when the village may have had around 30 dwellings. A mansion later known as the Clock­house was docu­mented in 1506 but this was one of few signif­i­cant devel­op­ments before the late 17th century, when City gentlemen began to establish rural retreats here. By then, Chipping Barnet had firmly estab­lished itself as the district’s commer­cial centre.

In the mid-18th century East Barnet gained a cottage school and the King’s Head public house on Cat Hill, while country seats were succes­sively rebuilt in an increas­ingly uniform style. Leisurely growth over the following century was not much quickened by the opening of New Barnet and Oakleigh Park stations but there were suburban villas on a handful of new streets by 1900.

The Clock­house was replaced by a parade of shops in 1925, when subur­ban­i­sa­tion was getting properly underway – a process accel­er­ated by the extension of the Piccadilly line to Cock­fos­ters in 1933. Soil excavated during the construc­tion of the line was used to raise the flood plain in Oak Hill Park, which opened to the public in the same year and is shown in the photo­graph above.*

East Barnet school opened on Chestnut Grove in 1937 and, by the outbreak of the Second World War, long rows of semi-detached and terraced housing had replaced almost every pre-20th-century property in the district. Comple­tion of some projects had to wait until after the war but the later houses look the same as their 1930s forebears.

The King’s Head pub (latterly called The Drum) closed in 2009 and the building is now home to East Barnet veteri­nary surgery. East Barnet school was rebuilt in 2011.

The residents of East Barnet are mostly white, Christian, married and owner occupiers – typical for the country as a whole, but less so for London.

Church Hill Road has been called ‘the ghosts’ promenade’; sightings have included knights on horseback, headless hounds and wandering noblemen. The root cause of these manifestations is said to be the denial of a Christian burial to the unpopular local landowner Geoffrey de Mandeville in 1144.

The 18th-century prophetess Joanna Southcott, also known as ‘Satan’s mistress’, apparently used to sit under an oak tree in what is now Oak Hill Park. The tree burst into flames on a clear day in the early 1930s.

* The photo of Oak Hill Park on this page is adapted from an original photograph, copyright Martin Addison, at Geograph Britain and Ireland, made available under the Attribution-ShareAlike 2.0 Generic Licence. Any subsequent reuse is freely permitted under the terms of that licence.