One of London’s Inns of Court since the 15th century, and a historic street running north-north-west from Chancery Lane station to King’s Cross 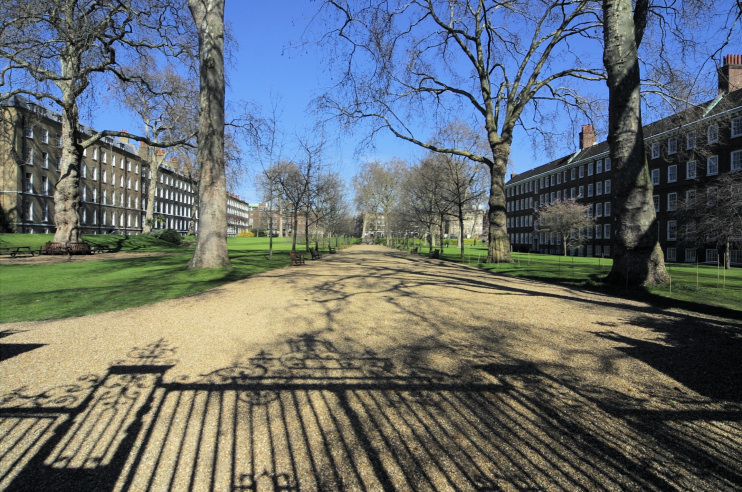 The 12th-century manor house that stood on this site belonged to Sir Reginald de Grey, Chief Justice of Chester and Constable and Sheriff of Nottingham, created Baron Grey de Wilton in 1295. He died in 1308 and some time in the following 50 to 60 years a learned society of lawyers based itself at the manor house. The present central hall dates from 1558.

Around 1606 the inn’s treasurer, Francis Bacon, laid out the gardens (shown in the photo­graph above) with a network of footpaths called ‘walks’, which were something of a novelty at the time.

During the 1680s Robert Ross­ington pulled down most of the prop­er­ties in what was then Gray’s Inn Lane and replaced them with plain, four-storey terraced houses. The one surviving example of Rossington’s devel­op­ment is at 55 Gray’s Inn Road.

The Calthorpe estate, built around 1820, was the first housing project of Thomas Cubitt, who went on to become London’s greatest spec­u­la­tive builder; among his achieve­ments are much of the original housing in Belgravia, St Pancras and Clapham.

The present incar­na­tion of the Blue Lion dates from 1936 but there had been a pub of this name on Gray’s Inn Road for nearly four centuries.

Gray’s Inn’s library, containing some 30,000 volumes and manu­scripts, was destroyed in an air raid in May 1941. The hall, too, was very badly damaged but was after­wards restored, while the chapel had to be wholly rebuilt.

More recent struc­tures of note include the ITN Building, designed in 1991 by Foster and Partners, and the UCL Ear Institute, which opened in 2005 next to the Royal National Throat, Nose and Ear Hospital. The latter closed in 2019, when its services moved to a new building in Blooms­bury, along with those of the Eastman Dental Hospital, which was also in Gray’s Inn Road.

The prince of Purpoole was the sovereign of an imaginary kingdom within Gray’s Inn who intermittently reigned over Christmas festivities held here in the late 16th and early 17th centuries. Gray’s Inn occupies the approximate site of the ancient manor house of Purpoole.