A residential district, public park(s) and a small industrial estate situated south of Chingford Hatch, all taking their name from a mansion on the edge of Woodford Green 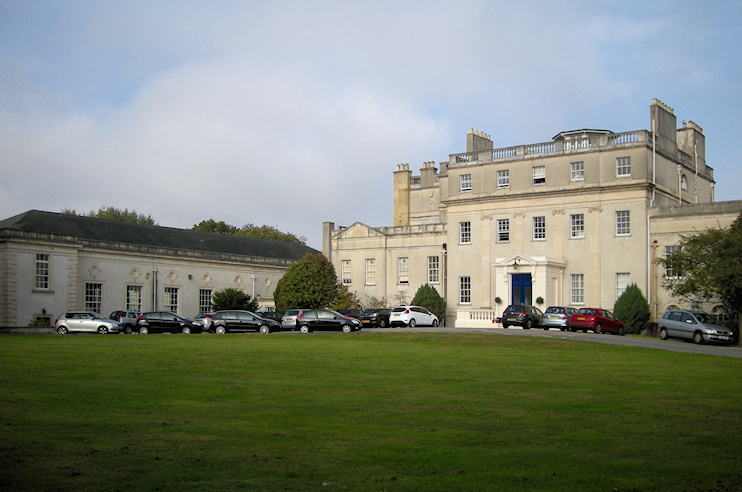 Shown in the photo above,* the manor house of Highams is located at the far right edge of the map below, well to the east of the locality called Highams Park, facing Woodford Green. Built in 1768 for Anthony Bacon MP, the house was next occupied by a former governor of Bombay.

Highams’ third owner, John Harman, called in Humphry Repton to landscape the grounds, and Harman’s son Jeremiah sold the estate to Edward Warner in 1849. The Warners were a prominent family in the area and prime minister William Gladstone was among their guests here.

When the station opened in 1873 (orig­i­nally as Hale End) the Warner family began to develop the grounds, making this one of the first parts of the wider district to be built up. The houses were generally more substan­tial than the family’s projects further south-west in Walthamstow.

The Corpo­ra­tion of London acquired 30 acres of Highams’ grounds in 1891 to preserve them as part of Epping Forest. The Highams Park woodland is still owned and main­tained by the City of London. It has a six-acre lake with fishing for carp, pike and tench.

The station was rebuilt in 1900 and Highams Park continued to grow during the early decades of the 20th century, gaining factories, schools, churches and some Arts and Crafts amenity buildings. The Electric cinema was built in 1911.

The house called Highams (which was also variously known as Highams Park and Higham Hill, House and Hall) served as a military hospital during the First World War and after­wards became a school, now Woodford county high school for girls. The house was stuccoed and much extended to the north and south, mainly between 1928 and 1938.

In the 1930s Essex county council built Highams Park school and Waltham­stow council created the open space called The Highams Park, which is located near the upper right corner of the map below.

Adding further confusion to the use of the Highams name, the gener­ously propor­tioned semi-detached houses to the immediate east of The Highams Park consti­tute the Highams estate, which has been desig­nated an area of special character.

Consid­ering that it is not on a main through route and is close to Waltham­stow, Woodford and Chingford, Highams Park has a surpris­ingly large shopping centre around the station, although many of the outlets are pound shops and fast-food takeaways.

Former indus­trial land off Larkshall Road has recently been rede­vel­oped with terraced houses, flats, live–work units and shops, including a flagship Tesco superstore.

* The picture of Woodford county high school at the top of this page is adapted from an original photograph, copyright Fay1982, at Wikimedia Commons, made available under the Attribution-Share Alike 3.0 Unported licence. Any subsequent reuse is hereby freely permitted under the terms of that licence. The picture of the level crossing and signal box, Highams Park, is cropped from a photograph, copyright Robin Webster and licensed for reuse under this Creative Commons Licence.