A compact and uniform grid of two- and three-storey brick and stucco terraces within the Kensington conservation area, situated just south-west of Notting Hill Gate station 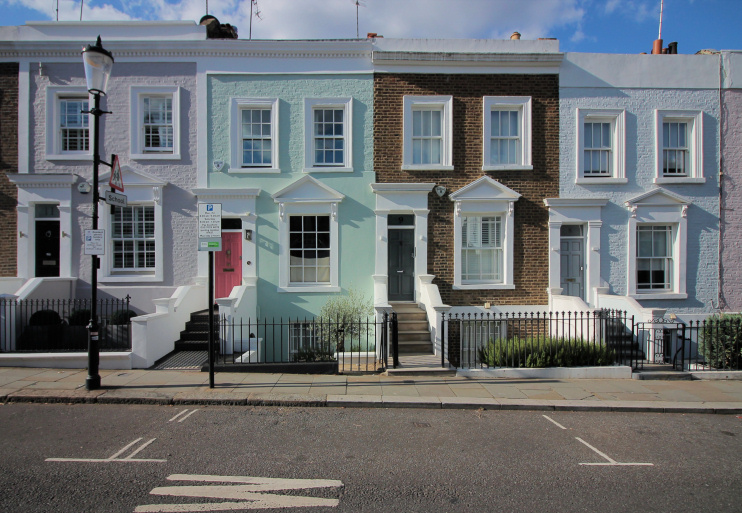 This was the northern half (or, more precisely, two-fifths) of the area once known as the Racks, part of the Campden House estate, which came into the posses­sion of the Phillimore family during the 18th century. In 1808 Joseph Phillimore sold this part of the Racks to John Jones of Harley Street, who two years later sold it on to John Johnson of Horse­ferry Road, West­min­ster, at what appears to have been a slight loss.

Johnson was a pros­perous building contractor, working mainly with stone that he quarried on Dartmoor. Here in Kens­ington he used most of his land as a brick­field, while encour­aging spec­u­la­tive building around the perimeter. Few houses were at first built – and most of those that were have not survived.

What is now Hillgate Village was almost entirely constructed in the decade after 1850, when Johnson’s son William began granting a succes­sion of building leases. Dozens of different contrac­tors were involved, most of them building only a few houses each. Two Baptist chapels were included: one on Kens­ington Place that was known for a while as the Labourers’ Church and one on what is now Hillgate Street where the congre­ga­tion appar­ently adhered to the strictest strand of Calvinism.

Since they were first laid out, almost all the streets of Hillgate Village have been renamed. The changes are as follows:

The evidence of the 1861 census suggests that the majority of houses were multi-occupied as soon as they were finished. Several houses contained more than 20 people – and 32 seem to have lived in one property on St James Street, spread among six households.

The occu­pa­tions of the heads of house­holds in Ernest Street included a baker, black­smith, boot and shoe maker, breeches-maker and brick­layer, as well as a carman, carpenter, coachman and cord­wainer.

The devel­op­ment was approx­i­mately rectan­gular but the original prop­er­ties in the north-east corner have all been replaced, primarily as a conse­quence of the construc­tion of Notting Hill Gate station in 1868.

One observer in the 1870s described Johnson Street as “a dingy, ill-favoured slum.” The neigh­bour­hood’s poor repu­ta­tion endured for almost another century but the Survey of London’s Northern Kens­ington volume, published in 1973, spoke of the remark­able “upward social trans­for­ma­tion which has taken place in recent years … its most obvious outward mani­fes­ta­tion being the liberal appli­ca­tion of paint in various pastel shades to the brickwork of the houses.” The survey made no mention of the local­i­ty’s modern name – and nor did any other printed work at that time. However, a decade later property corre­spon­dents were regularly reporting on “the attrac­tive mid-Victorian terraced houses in much favoured ‘Hillgate Village’ … close to Notting Hill.”

Kens­ington & Chelsea council has since desig­nated Hillgate Village a ‘character area’ – covering roughly the area shown in the map below (except on narrow screens) – noting its “dense urban grain and uniform layout of [mainly] two storey terraced streets clearly distinct from the adjacent district centre.” The village has one strik­ingly modern house – at 23 Kens­ington Place. This three-bedroomed property (offered for sale at £3,650,000 in 2014) has been grade II listed for its archi­tec­tural quality, for which Tom Kay was responsible.

The village pub is The Hillgate, at 24 Hillgate Street. On Farmer Street, Geale’s restau­rant has been serving fish and chips since 1939. There’s a choice of cham­pagnes on the wine lists at both estab­lish­ments, as one would expect here.

PD James was the first writer to use the locality’s modern name in a literary work – in her 1986 mystery novel A Taste for Death: “His folk used to live in Hillgate Village in the old days. Proper little slum it was, when his granddad was alive. A hundred and sixty thousand they’re asking for the houses now.”

The historical information in the above article is primarily condensed from the relevant parts of chapter V of the Survey of London: volume 37: Northern Kensington (1973)