An infrequently used name for a heavily redeveloped part of north-east North Kensington, located between the Grand Union Canal and the main railway line into Paddington 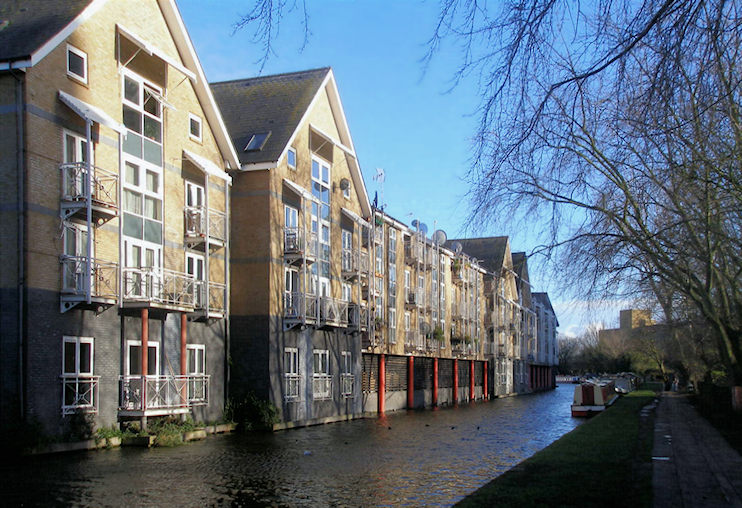 Kensal New Town – as it was orig­i­nally called (and occa­sion­ally still is) – was laid out in the 1840s following Kensal Green’s successful devel­op­ment. From the start, however, it was a poorer and less fash­ion­able sister and it dete­ri­o­rated into a notorious slum.

This was a detached part of the parish of St Luke’s, Chelsea, covering about 140 acres and nicknamed Chelsea-in-the-Wilder­ness. In 1899 it was incor­po­rated within Kens­ington despite the Royal Borough’s objec­tions – the real reason for which seems to have been the abject condition of the inhab­i­tants. In 1902 social reformer and statis­ti­cian Charles Booth described Kensal New Town as an “isolated district, shaped like a shoe and just as full of children and poverty as was the old woman’s dwelling in the nursery rhyme.”†

The main improve­ment before the First World War was the creation of the Emslie Horniman Pleasance, a little park on Bosworth Road with features by the eminent architect CFA Voysey that have since been restored.

From the 1930s the council began a programme of slum clearance and estate building. The work was inter­rupted by the Second World War and was slow to resume after­wards, with the result that rapacious landlords continued to prey on the local­i­ty’s inhab­i­tants until the early 1960s.

The rede­vel­op­ment programme even­tu­ally erased much of the original street pattern and culmi­nated on the east side with Ernő Goldfinger’s Trellick Tower, which was completed in 1972. This is a love-it-or-hate-it 30-storey concrete block with a distinc­tive separate lift and stair tower, designed as a unité d’habitation in the style of Le Corbusier. Built to high standards and visible for miles, Trellick Tower is now grade II listed as a relic of a bygone age of monu­mental municipal building.

Like much of North Kens­ington, Kensal Town is now a very multi­cul­tural community, including residents of Afro-Caribbean, Portuguese and Moroccan birth or descent.

Former home secretary Alan Johnson’s bestselling memoir This Boy (2013) tells of terrible hardship in his childhood home – a condemned house in (now truncated and rebuilt) Southam Street. The book’s publicity suggests this was in “pre-gentrified Notting Hill” – but much of this end of the district remains deprived today, though conditions are immeasurably better than they were in the 1950s.

† “We have already traced the line of poverty which follows the Grand Junction Canal from Paddington Basin to the Lock Hospital, and as its track winds once more to the North, before passing out of London at Kensal Green, it leaves between itself and the railway another isolated district, shaped like a shoe and just as full of children and poverty as was the old woman’s dwelling in the nursery rhyme.” Charles Booth, Life and Labour of the People in London (1902), Chapter III, The Outer West

* The picture of Canalside properties at Kensal Town at the top of this page is adapted from an original photograph, copyright John Slater, at Geograph Britain and Ireland, made available under the Attribution-ShareAlike 2.0 Generic Licence. Any subsequent reuse is hereby freely permitted under the terms of that licence.