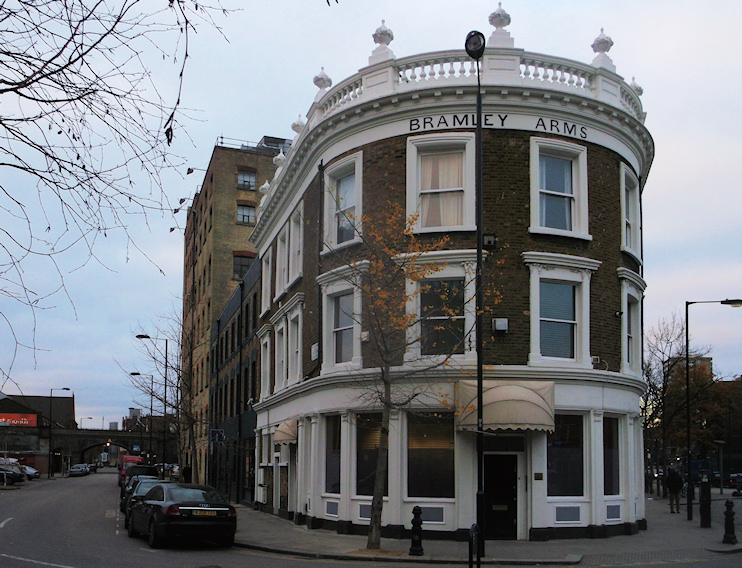 Latimer Road’s name orig­i­nates from land endowed by Edward Latymer for the funding of Hammersmith’s Latymer school in the early 17th century.

The Metro­pol­itan Railway line to Hammer­smith was built through the district in 1864 and a station opened four years later on Bramley Road, at the junction with a branch line running south to Addison Road. By this time cottage laundries and pigsties were replacing former brick­fields and the station was nicknamed ‘Piggery Junction’.

Latimer Road’s poverty drew municipal and phil­an­thropic assis­tance. In 1880 the school board for London built the three-storey Latimer Road school, which now houses Ormiston Latimer Academy, an alter­na­tive provision school that provides education for vulner­able and chal­lenging young people. Harrow school estab­lished a mission on the street in 1884 and a school in 1887.

However, depri­va­tion continued well beyond the Victorian era, as Horace Newte observed in 1915: “Between Notting Hill and Wormwood Scrubs lies a vast desert of human dwellings … by scarcely percep­tible degrees, there is a declen­sion of so-called respectability, till at last the frankly working-class district of Latimer Road is reached.”†

The rela­tion­ship between the street and the station was broken off by the construc­tion in the 1960s of the Westway and the West Cross Route to Shepherd’s Bush, when Latimer Road’s south­ern­most section was renamed Freston Road.

The Greater London Council planned to demolish much of Freston Road and replace it with industry and high-density flats but squatters occupied the houses and declared the Republic of Frestonia in 1977. The GLC backed down and granted the squatters temporary leave to stay, while the Bramley Housing Co-operative planned and built on a human scale. The first new homes were completed in 1985.

In recent years pockets of the Latimer Road area have gone upmarket, notably at the Phoenix Brewery on Bramley Road and ‘Notting Dale Village’ on the newly-created Nicholas Road. However, most of the local­i­ty’s residents still live in subsidised housing and there are rela­tively few leisure amenities – other than the huge Westway sports centre – and little choice of places to shop or eat. Of course, on the other side of the West Cross Route it’s another world.

In a classic chase scene in The Lavender Hill Mob (1951), all the police cars converge in a pile-up at the junction of Bramley Road and Freston (then Latimer) Road in front of the Bramley Arms. Shown in the photograph above,* the pub also featured in the films Sid and Nancy, Betrayal, Leo the Last and Quadrophenia.

* The picture of the Bramley Arms on this page is adapted from an original photograph, copyright David Anstiss, at Geograph Britain and Ireland, made available under the Attribution-ShareAlike 2.0 Generic Licence. Any subsequent reuse is hereby freely permitted under the terms of that licence.
† Sparrows: The Story of an Unprotected Girl