A Victorian street in south Battersea, with Clapham Junction station close by its western end 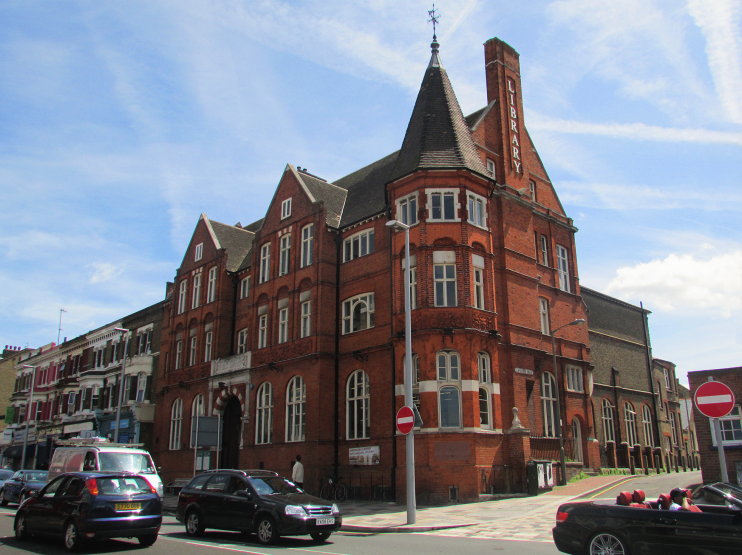 The street’s name derives from the lavender that was once culti­vated in market gardens to the north of the road.

After the opening of Clapham Junction station in 1863 the surrounding area was rapidly built up with terraced housing for the working classes, many of whom moved here from over­crowded districts such as Shored­itch. Lavender Hill became one of the main shopping streets serving the new residents.

The parish church of the Ascension of the Lord, Lavender Hill, was conse­crated in 1883. At the request of the parish­ioners, it was designed to resemble some of the newer churches they had left behind in the East End.

Charles Booth rated the 19th-century school board division of Lavender Hill one of London’s most ‘comfort­able’ quarters.

Shown in the photo above,* Battersea library was built in 1888–90 by Edward William Mountford. Pevsner calls its style ‘Pont Street Dutch’.

Also the work of EW Mountford, Battersea town hall opened on Lavender Hill in 1893 and just under a century later the building became Battersea arts centre. BAC, as it nowadays likes to call itself, is highly regarded for its fringe theatre produc­tions. The map below is centred on the arts centre.

The last note­worthy addition to the street’s archi­tec­ture came in 1924 with the opening of Battersea reference library, built to the rear of the main library by TWA Hayward in an Arts and Craft style. Since then there has been little renewal of the built envi­ron­ment, except for the intrusion of a few compact blocks of flats, an ugly post office and a somewhat brutal police station. The street’s shops, services and eateries reflect the mixed character of the neigh­bour­hood: part gentri­fied but mainly working-class.

The Lavender Hill Mob is a 1951 Ealing comedy about a mild-mannered civil servant who decides to use his inside knowledge of bullion transport to steal a million pounds’ worth of gold and then spirit it out of the country. The notion that a retiring, dull individual could pull off this crime is underscored by the film’s title, which conveys the unlikelihood of hardened criminals hailing from a respectable part of London like Lavender Hill.

* The picture of Battersea library at the top of this page is adapted from an original photograph, copyright Reading Tom, at Flickr, made available under the Attribution 2.0 Generic Licence. Any subsequent reuse is freely permitted under the terms of that licence.