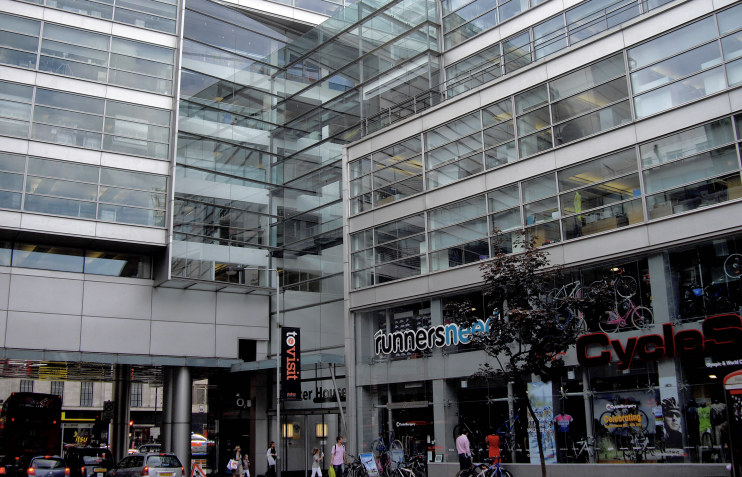 “NY Times takes space in Midtown for new HQ” ran a headline in Property Week in December 2014. This was not a reference to devel­op­ments in Manhattan but to the New York Times Company’s proposed new UK head­quar­ters at 18 Museum Street in Bloomsbury.

In a London context, the term ‘Midtown’ made its first appear­ance sometime around 1990. Ever since then, respected bloggers like Christo­pher Fowler (among many others) have been ridi­culing it and insisting that it never will (or never did) catch on. And yet it refuses to go away – unlike failed inven­tions such as ‘Cityside’ and ‘Noho’.

The reason for its appeal to real estate devel­opers, letting agents and property jour­nal­ists is obvious: ‘Midtown’ is an inter­na­tion­ally recog­nis­able concept. Even if you know nothing at all about London – let alone how to spell or pronounce ‘Holborn’ – ‘Midtown’ sounds like a good place to be.

Its precise where­abouts, however, is uncertain – if one accepts that it exists at all. Having first taken root somewhere around the southern end of Procter Street, it has since expanded in all direc­tions, but espe­cially north-westwards and along major thor­ough­fares. Some extrem­ists define Midtown as the whole area between the City and the West End.

Estab­lished in 2005, the Midtown business improve­ment district (BID) orig­i­nally covered most of the area shown on the map below and a few parts beyond. Subse­quently calling itself BEE Midtown, its remit was expanded to include St Giles, Farringdon and Clerken­well, which is almost as big an area as that repre­sented by the Midtown business club, which wildly asserts that “the Midtown area of London broadly extends to Euston Road in the north, the Thames in the south, Farringdon Street/Road in the east and Trafalgar Square/Tottenham Court Road in the west.”

Midtown’s biggest employers have histor­i­cally been govern­ment agencies and profes­sional services providers like insurers, lawyers, accoun­tants and recruit­ment consul­tants – but the marketing hype has succeeded in luring more glamorous busi­nesses, espe­cially in the media sector.

When Midtown first began to take off, the resur­gence of this often over­looked area was driven by rela­tively compet­i­tive rents but this advantage began to decline in the early years of the 21st century. Research conducted in summer 2014 by the property consul­tants CBRE revealed that Midtown was outper­forming the rest of the central London leasing market. The Evening Stan­dard’s Jonathan Prynn later proclaimed that “Midtown is boomtown” – adding that “a cluster of hip hotels, slick devel­op­ments and rapidly rising rents mean the area east of Oxford Street has finally arrived.”

In 2021 the Midtown BID (aka BEE Midtown) effec­tively admitted defeat in its attempt to rebrand the area and instead rebranded itself – as the Central District Alliance.