A historic underground station and its immediate environs, situated in south Clerkenwell 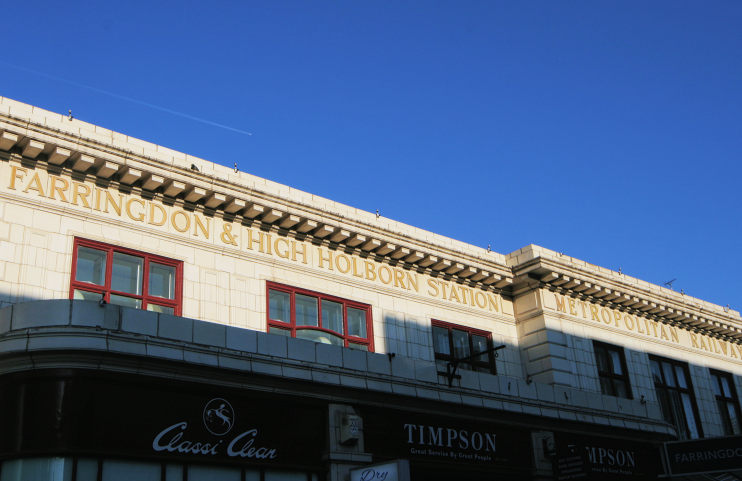 Farringdon’s name defines only a compact quarter in the immediate vicinity of the station because there are other well-known local­i­ties close by, such as Smith­field and Hatton Garden. The city wards of Farringdon Within and Farringdon Without cover a much larger area south of Char­ter­house Street.

Documents of the late 13th century record William de Farindon (whose name was spelt several ways, sometimes within the space of a single paragraph), who was a goldsmith and a City of London alderman. He probably orig­i­nated from another Farringdon (there are a couple in the West Country) or Faringdon in Oxford­shire, and bestowed his appel­la­tion on this locality.

This area lay well away from the heart of medieval London and remained isolated until the Fleet river was covered in 1737 and Farringdon Street was constructed over it. Shoddy housing went up on Saffron Hill and the neigh­bour­hood became seriously over­crowded. Work to extend Farringdon Street began in the early 1840s. Orig­i­nally called Victoria Street, and later Farringdon Road, the new thor­ough­fare pushed very slowly north towards King’s Cross over the following two decades, cutting through the Saffron Hill slums; 1,600 homes were demol­ished and The Times estimated that 16,000 residents were displaced.

The arrival of London’s first under­ground railway brought further disrup­tion in 1863, when Farringdon Street station opened. The station was relocated to its present position two years later when the line was extended to Moorgate and its spacious interior survives from that time.

Ware­houses, type foundries and other commer­cial and indus­trial premises were built along Farringdon Road in the 1860s and 1870s and a miscel­la­neous market began to operate, which later special­ized in second-hand books. Some of the road’s earliest buildings survive, mixed in with a largely unat­trac­tive set of office blocks from the latter part of the 20th century. The Guardian newspaper moved its head­quar­ters to Farringdon Road in 1976. A newsroom, visitor centre and archive opened in 2002 in a converted Victorian bonded warehouse.

In recent years the Farringdon area has gained new resi­den­tial accom­mo­da­tion, mainly well-appointed apart­ments for City busi­ness­people, and a variety of bars and nightclubs.

With its Thameslink/underground connec­tion and the arrival of the Elizabeth line (Crossrail), Farringdon has been touted as the most signif­i­cant hub in central London. Some indi­ca­tion of the locality’s vigour is provided by the prolif­er­a­tion of commer­cial pins on the map below.