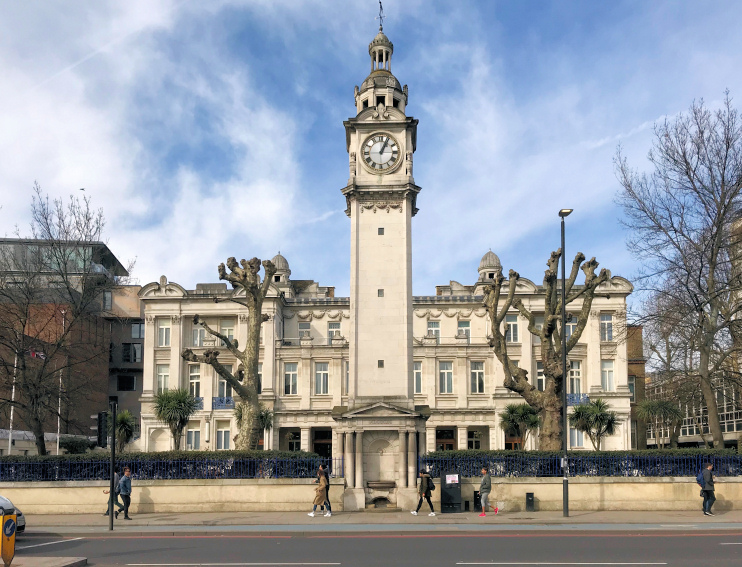 Mile End’s name derives from a hamlet – first recorded in 1288 – that grew up one mile from Aldgate. Mile End Road once formed the most imposing approach to London and Wat Tyler assembled his followers here during the Peasants’ Revolt of 1381.

The first Jewish burial ground on Mile End Road was estab­lished in 1657 by permis­sion of Oliver Cromwell and has been called one of the most hallowed spots for British Jewry.

During the late 17th century Stepney expanded towards the southern side of Mile End Road, while the part of Spital­fields that lay east of Brick Lane evolved into a district known as Mile End New Town. Small groups of houses later appeared along Mile End Road itself, forming a hamlet called Mile End Old Town, although the name provided a more geograph­ical than chrono­log­ical distinction.

Over the course of the 18th century the road was lined with a contrasting mixture of merchants’ houses and indus­trial buildings, including a brewery and a distillery. A blue plaque at 88 Mile End Road marks the site of the house where Captain James Cook once lived.

Following an exodus of the mercan­tile popu­la­tion, the mostly poor Jewish community swelled. A large open space known as the Mile End Waste was used for political and religious meetings.

In another of Mile End’s contrasts, Dr Barnardo converted ware­houses alongside the Regent’s Canal into Copper­field Road ragged school (which later became a museum) in 1876, while colleges were estab­lished on Mile End Road in the 1880s that became part of the Univer­sity of London in 1915. The photo­graph at the top of this article shows the Queen’s Building and clock tower at Queen Mary Univer­sity of London.*

Condi­tions in the district dete­ri­o­rated during the first half of the 20th century and after the Second World War the London County Council and Stepney borough council cleared bomb sites and slums (including Captain Cook’s house) and rebuilt inten­sively. Blocks of flats rose ever higher up until the late 1970s but housing asso­ci­a­tions have built less obtru­sively in the last three decades. The road retains a selection of Georgian gems but these are over­shad­owed by the low-rent shops and takeaways that have replaced the grand emporia of a century ago.

Featured below, Pulp’s song ‘Mile End’ (1996) bewails life in a tower block squat off Burdett Road: ‘The fifth floor landing smells of fish – not just on Friday, every single other day’.

* The picture of Queen Mary University of London at the top of this page is modified from an original photograph, copyright Matt Brown, at Flickr, made available under the Attribution 2.0 Generic licence. Any subsequent reuse is freely permitted under the terms of that licence.