A sprawling south London suburb with an ancient village at its heart, situated south of Tooting 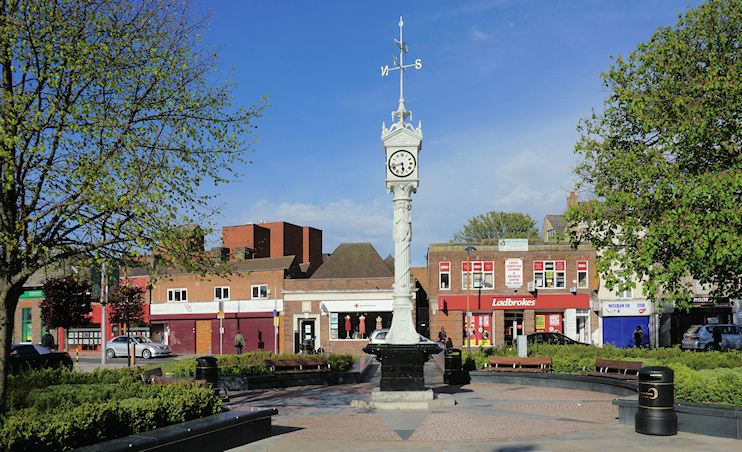 Evidence of both Roman and early Anglo-Saxon burials has been discov­ered in the area, but Mitcham’s existence as a place was not reliably recorded until Domesday Book (1086), when its name was spelt Michelham, that is ‘large homestead or village’ – from Old English micel and hām.

Medieval Mitcham consisted of four manors and two settle­ments, which were focused on the Upper and Lower Greens. Elizabeth I is said to have granted a charter for an annual fair after she had enjoyed watching the formerly unof­fi­cial festiv­i­ties here.

City gentlemen estab­lished country retreats here in the mid-17th century, attracted by the village’s repu­ta­tion for clean air at a time when London was frequently ravaged by epidemics, and Mitcham was nicknamed ‘the Mont­pe­lier of England’.

Robert Cranmer acquired the manor of Mitcham Canons in the 1650s and his family held the lordship for five gener­a­tions. The Canons manor house was built in 1680 and has an even older dovecote surviving in the grounds.

Mitcham can make a strong claim to have the country’s oldest cricket ground in continual use, with good evidence that games were being played on the Cricket Green in 1685.

In 1705 Eagle House was built just north of Upper Green for Fernando Mendes, physician to Catherine of Braganza. The grade I listed house is now a primary school for pupils with autism and related social and commu­ni­ca­tion difficulties.

From the mid-18th century large parts of Mitcham were given over to the culti­va­tion of aromatic plants and shrubs, including camomile, poppies, liquorice and anise. The industry began when Ephraim Potter and William Moore took advantage of Mitcham’s rich black loam to grow lavender, setting up a distillery at Tamworth Farm. Others soon followed, also producing oils of rose and pepper­mint. From its inception in 1802 the horse-drawn Surrey Iron Railway was used to transport Mitcham’s horti­cul­tural produce to London.

The parish church of St Peter and St Paul dates from 1819–22, with medieval fabric in the base of its tower. The architect was George Smith, who was also respon­sible for the ‘Needle of Kent’ at Black­heath Park. Smith liked to design his churches in varying histor­ical styles. Here in Mitcham he chose perpen­dic­ular Gothic.

The iron railway went out of business in the 1840s, but its route was subse­quently used by steam trains and latterly the Croydon Tramlink.

The opening of Mitcham Junction station in 1868 attracted noxious indus­tries rather than suburban homes, and helped bring large-scale lavender-growing to an end. Never­the­less, even after the physic gardens had been built over or converted to market gardens, the finest extracts were still described as ‘Mitcham lavender oil’.

It was not until much later in the 19th century that private builders began to develop the village and outlying settle­ments such as Phipps Bridge and Gorringe Park.

The open spaces of Mitcham Common were saved for public use in 1891. Shops were built around Fair Green, where the fair continued to be held until 1923, when it moved to Three King’s Piece, on the common.

Mitcham clock tower was unveiled on Fair Green in 1898 to mark Queen Victoria’s diamond jubilee. The cast-iron clock tower – “or rather clock column,” as Pevsner says – has since been relocated several times, most recently to the unpre­pos­sessing spot shown in the photo­graph at the top of this article.

Suburban and indus­trial devel­op­ment continued after the First World War and the arti­fi­cially quaint Mitcham Garden Village was completed in 1932. For over 60 years Locks Lane was the home of Renshaw’s marzipan factory, built on a site that was orig­i­nally a laundry.

Municipal housing schemes were the dominant form of post-war construc­tion, notably at East­fields and Pollards Hill. Inevitably, privately built apartment blocks have since become the most common type of devel­op­ment, with the council striving to preserve what remains of Mitcham’s heritage in the Cricket Green conser­va­tion area – and community and heritage campaigners often urging them to do better.

Mitcham station closed in 1997 and was replaced three years later by a tram stop. The grade II listed station office survives from the days of the Surrey Iron Railway. Mitcham East­fields station opened in 2008.

Mitcham’s limited transport connec­tions have made it more afford­able than other districts at a compa­rable distance from central London, despite its wealth of green spaces. Most residents of the Cricket Green and Lavender Fields wards are white British, and the principal ethnic minori­ties are of black African and black Caribbean descent. The wards are socially very mixed.

From 1605 to 1608 the metaphysical poet John Donne lived on Whitford Lane, where he scraped a meagre subsistence as a lawyer.