Although not marked as such on many maps, this is a distinct locality lying on the eastern edge of Mitcham, south-west of Norbury 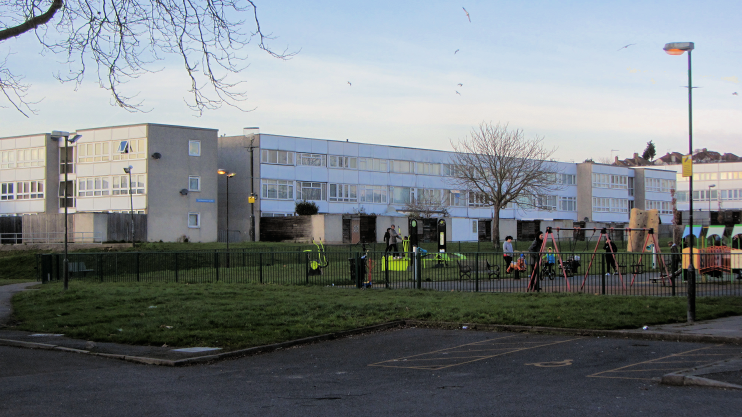 Pollards are trees that have been cut back to promote the growth of new, short branches. Most of the woodland was cleared in the Middle Ages, becoming the meadows and dairy pasture of New Barns Farm, also known as Galpins. James Arthur – a ‘physic gardener’ – grew aromatic herbs here in the mid-19th century. Tooting Bec golf club bought the farmhouse and around 100 acres of land in 1905 and cleared what remained of the woodland on Pollards Hill.

The golf club was unsuc­cessful and so was a successor, the Pollards Hill golf club. The site is now occupied by the Harris Academy Merton (previ­ously Tamworth Manor high school) and neigh­bouring housing.

Outward devel­op­ment from Mitcham was slow until the council iden­ti­fied the area as a suitable site for ‘homes for heroes’ after the First World War. Even then, planned house­building had not been completed by the outbreak of the next war.

When hostil­i­ties ended, Mitcham council quickly grabbed the remaining land for the erection of prefab­ri­cated dwellings to ease the borough’s housing shortage. The first homes were ready in January 1946. The council added six-storey maisonette blocks in the early 1950s.

During the following decade the prefabs were replaced by a pioneering ‘perimeter planning’ scheme of low-rise flats (as shown in the photo­graph at the top of the article*) and houses, set around a series of squares, bounded by Recre­ation Way. The project was completed in 1971. Seven hundred of these prop­er­ties were refur­bished in the early 21st century.

According to the 2011 census, 44 per cent of the residents in Merton’s Pollards Hill ward are white (down from two-thirds in 2001). The principal ethnic subgroups are of white British, black African and black Caribbean origin or descent. More than 70 per cent of homes are owner-occupied but there is a high level of unemployment.

The author Christopher Street has suggested that a set of triangular ley lines connects Pollards Hill with the churches of St Mary’s in Addiscombe and Beddington. These lines are ancient routes across the countryside that follow alignments linking sacred sites; there is evidence of prehistoric earthworks at Pollards Hill. Some people claim that mystic forces are associated with ley lines.